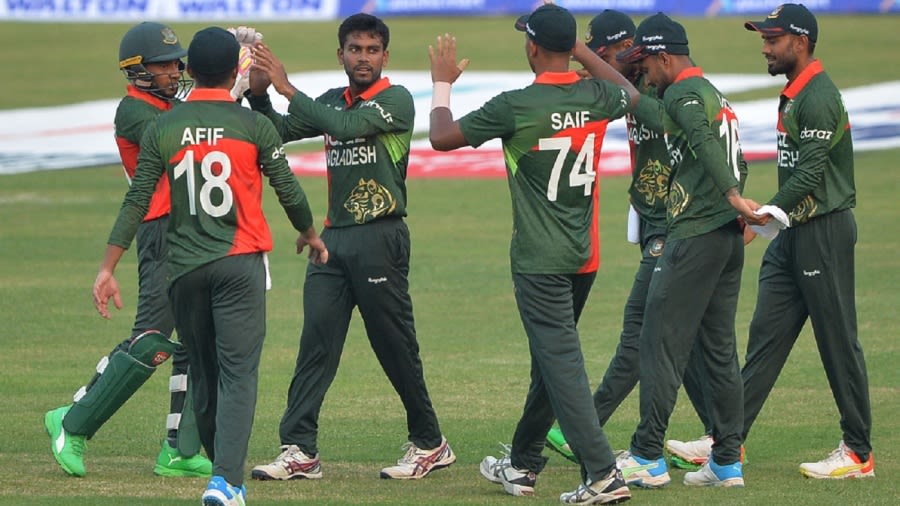 Mehidy Hasan took 4 for 30 to wreck Sri Lanka’s top order and set Bangladesh on track to defend their 257 for 6, which in the end, they managed easily, despite a valiant Wanindu Hasaranga innings.

That they were chasing so many on a sluggish surface was down to Mushfiqur Rahim‘s 87 off 84, as well as half-centuries from Mahmudullah and Tamim Iqbal. It had been a 107-run fifth-wicket stand between Rahim and Mahmudullah that raised Bangladesh from a difficult middle-overs position, and delivered them in a healthy state to the death overs.

But it was Miraz who made the most decisive plays of the match. He claimed the first wicket of Sri Lanka’s innings, getting Danushka Gunathilaka caught and bowled in the Powerplay, before coming back in the middle overs to dismiss Kusal Perera, Dhananjaya de Silva and Ashen Bandara – all of them bowled – to leave Sri Lanka gasping at 102 for 6 in the 28th over. He was almost unhittable through the middle overs, batsmen attempting to sweep him, charge him, and play him from deep in the crease, all to little avail.

Also in good rhythm for Bangladesh was Mustafizur Rahman, who took 3 for 34 from his nine overs, relying heavily on his slower deliveries, and of course, his cutters. Mohammad Saifuddin claimed two wickets and Shakib Al Hasan took one, as they bowled Sri Lanka out in the 49th over for 224.

The Bangladesh attack also withstood Hasaranga’s late charge. He hit 74 off 60 in a scintillating innings that contained five sixes, bringing Sri Lanka within 50 runs of the target. But Saifuddin eventually had Hasaranga caught at deep square leg in the 44th over, and Rahman then had Isuru Udana (with whom Hasaranga had put on a 62-run eighth-wicket stand) caught at wide long on, next ball. Sri Lanka’s mild hopes were snuffed out.

Earlier, it had been Mushfiqur and Mahmudullah’s stand that had been the backbone of Bangladesh’s innings. They came together when Bangladesh lost two wickets in two balls – Dhananjaya de Silva trapping Tamim Iqbal and Mohammad Mithun in front in the 23rd over, to leave Bangladesh at 99 for 4.

But together, the new pair set about bedding in against the spinners, cautiously at first, venturing only the occasional boundary. The run rate had fallen to 4.13 by the end of the 30th over, but eventually they would pick up the pace – Rahim crashing Hasaranga for four through deep midwicket, before hitting de Silva aerially over cover to complete his half century, off 52 balls.

Although the Mirpur track was slow, there was no drastic turn at this stage, and both batters soon appeared extremely comfortable against Sri Lanka’s spinners, frequently slinking around the field to manoeuvre the ball into gaps square of the wicket. By the end of the 42nd over, their recovery was complete – Bangladesh nicely poised at 199 for 4. Mushfiqur would soon perish hitting a reverse sweep to short third man, and Mahmudullah would be bowled by de Silva, but Afif Hossain and Saifuddin ensured the platform that had been laid got a decent finish, which propelled Bangladesh beyond 250. Earlier, Iqbal had produced a solid 52 off 72 balls.

Sri Lanka never seemed to have the measure of this chase. Gunathilaka was out in the fifth over. Pathum Nissanka dragged Rahman to short midwicket to leave the visitors two down for 41 in the eighth over. Then Miraz mowed his way through a tentative top order, and it never seemed likely that Sri Lanka would make a serious charge for victory, even when Hasaranga was batting beautifully.

On the bowling front, de Silva had returned Sri Lanka’s best figures, taking 3 for 45 from his 10. Udana had been expensive, especially at the death, conceding 14 and 10 in his last two overs, with his 10 overs costing 64. (Courtesy ESPN Cricinfo)