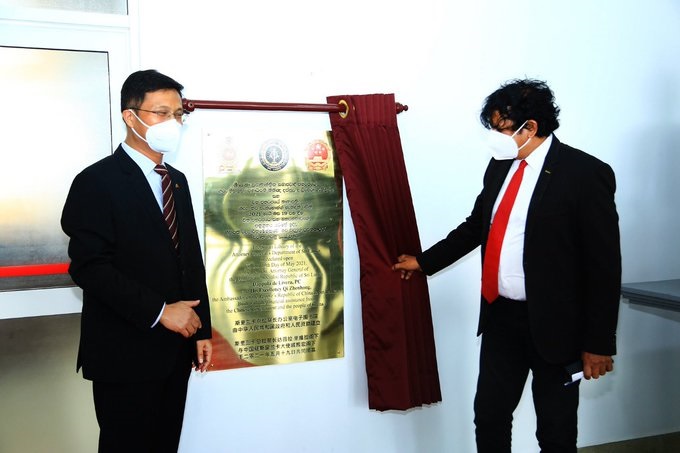 The Attorney General’s (AG) Department has come under fire over a plaque placed in the premises in the Chinese language Mandarin.

The plaque was placed following the opening of an electronic library constructed with Chinese funding at the new building of the AG’s Department.

“It’s an internal E-Library in the AG’s Department, funded by the Government and People of China. Chinese language is displayed as a kind gesture towards China, which is highly appreciated,” the Chinese Embassy in Sri Lanka tweeted in response to criticism over the plaque.

The AG’s Department was criticised for not including Tamil in the plaque but only English, Sinhalese and the Chinese language.

Lawyer Ishara M. Jayasena noted that under the Sri Lankan Constitution Tamil should also be included.

“Dear embassy with due respect, your kind gesture is understandable. In case U are not aware, under Art.19 of the Constitution of SL ‘the national languages of SL shall be Sinhala & Tamil.’ Pls let us know who made the decision to ignore one national language & not the other?” Lawyer Ishara M. Jayasena tweeted.

“Sri Lanka’s SHAME. AG’s Department, SHAME ON YOU. This is pathetic. How to expect better from others when AG’s Dept does this?” journalist Marianne David tweeted.

Just recently concerns had been raised over a name board placed at the Colombo Port City which had English, Sinhalese and the Chinese language and not Tamil.