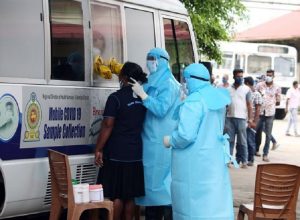 Over 650 Covid cases have been reported in the Colombo District in the 24-hour period ending at 06 am today.

Officials said a total of 674 infections were detected in several areas of the Colombo District, making it the second-highest infection rate to be reported during this period.

A total of 43, 877 Covid cases have been reported from the Colombo District since the second wave, which broke out on the 04th of October.

Meanwhile, the Gampaha District reported the highest number of Covid infections with 822 cases in the last 24-hours.

The Kalutara District detected 287 cases, while 248 infections were reported in Kurunegala, and 204 from Trincomalee.

Less than 20 cases each were reported in the remaining Districts in the country.

Sri Lanka reported a total of 3441 Covid cases in the 24-hour period ending at 06 am today.

Only two individuals who had returned from overseas were found to be infected, which is a significant drop in comparison to the high number of infected overseas cases that have been reported over the last few weeks.

However, 38 deaths due to COVID-19 were reported in Sri Lanka during this period, raising the total death toll to 1089.

Sri Lanka is currently battling the third wave of the coronavirus, which has emerged following the detection of the New Year coronavirus cluster in April. (Colombo Gazette)