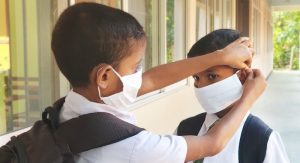 Children are now at grave risk from the coronavirus in Sri Lanka, health officials warned today.

Public Health Inspectors (PHI) Association Secretary M. Baalasooriya told Colombo Gazette that a large number of children have been found to have been infected at present.

Apart from children, the risk of infection is high for pregnant women in Sri Lanka as well. A large number of pregnant women are currently infected with the virus in several areas in the country, he said.

Stating that initially it was assumed that there was a significant spread of Covid among senior citizens, Baalasooriya pointed out the situation has now changed with mostly children and pregnant women getting infected.

Commenting on the precautions that could be taken to prevent children from being infected, Baalasooriya said the face mask regulation for children has been revised.

He said as of now children above the age of two must wear face masks when being taken outdoors.

Baalasooriya further said as children below the age of two cannot wear face masks, parents must take precautions by sanitizing or washing their hands and feet continuously.

He further called on the parents to ensure that children do not gather together at any time and always maintain social distance with outsiders.

Meanwhile, the Director of the Lady Ridgeway Hospital for Children in Colombo Dr. G. Wijesuriya informed Colombo Gazette that a large number of children are among infections being detected in Sri Lanka at present.

He said a high number of infected children have been found in several areas of Sri Lanka over the last few weeks.

Dr. Wijesuriya said, however, the numbers have been relatively low so far in comparison to the infections that were reported during the second wave of the coronavirus. (Colombo Gazette)