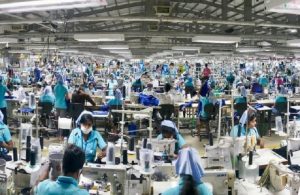 He said factories in Wathupitiwala, Norwood, and Pallekele are also reported to be infected.

Thirty employees of a garment factory in Wathupitiwala, Nittambuwa have been found to be infected, while 80 others have been placed under quarantine.

Sixteen employees of a garment factory in Norwood, Hatton have also been reported to be infected, with 50 of their close associates being isolated and a total of 100 employees infected so far.

Nearly 400 employees of a factory in the Thulhiriya Free Trade Zone (FTZ) have been found to be infected with COVID-19. Another factory under the same management in Pallekele, Kandy is also reportedly affected with over 50 employees testing positive for the virus, Baalasooriya said.

He said out of the total number of 300,000 employees working in the Katunayake FTZ, it has been estimated that nearly 50,000 employees have been infected.

Anton Marcus said despite employees calling for the factories to be closed, the employers are refusing to do so due to urgent and pending orders.

An infected factory in the Koggala Free Trade Zone was ordered to temporarily close, after the area Public Health Inspectors had obtained a court order, citing a large number of infected employees, he revealed.

Anton Marus further said even though some factories are conducting PCR tests, a majority of the factories have instructed employees to conduct PCR tests on their own, resulting in many failing to do so due to the high cost of the test.

Commenting on the new clusters emerging in the garment sector, PHI Association Secretary M. Baalasooriya said it is essential to prevent the further spread of the virus within factory employees.

He warned that the situation will spiral out of control if factories commence 100% operations under the existing coronavirus situation in the country.

Baalsooriya pointed out that there was a significant spread of the virus among garment factory employees due to the management conducting Rapid Antigen Tests (RAT), instead of PCR tests.

He added that some factory management were doing so due to the lower cost of a RAT test in comparison to a PCR.

The PHI Association Secretary said RAT tests were not as accurate as PCR tests and could fail in detecting infected employees, therefore, posing a risk of a further spread of the virus among factories.

Meanwhile, Minister of Labour Nimal Siripala De Silva today requested the Commissioner General of Labour to carry out an immediate investigation into the apparel factory in Thulhiriya where 400 employees are said to have contracted Covid. (Colombo Gazette)