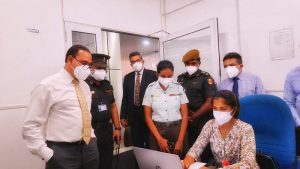 Minister of Sports and Youth Affairs Namal Rajapaksa said the project was inaugurated at the Army Hospital in Sri Jayawardenapura Kotte.

The pilot project is being curated by the Information and Communication Technology Agency (ICTA) of Sri Lanka.

He said measures are being taken in order to fast-track and streamline the entire national vaccination drive.

A total of 1, 397, 999 individuals have been administered the first dose of the coronavirus vaccine to date in Sri Lanka.

The Epidemiology Unit of the Health Ministry said 300, 121 people have been administered the second jab as of yesterday (18).

As per the Health Ministry, a total of 925,242 people have received the Covishield vaccine as the first dose, while 297,686 among them have already received the second jab.

A total of 14,917 people have received the Sputnik V vaccine as the first dose, while people are yet to receive it as the second jab. (Colombo Gazette)