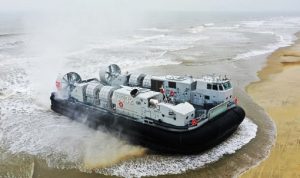 China has put the US on alert amid rising tensions over Taiwan and the South China Sea. This week, the Chinese People’s Liberation Army (PLA) released videos showing marines in island landing drills “targeting Taiwan”. The military drills appeared to simulate a Chinese invasion of Taiwan, prompting increased concern among Taiwanese officials and its allies including the US.

The drills showcased the Type 075, a 40,000-tonne amphibious warship which is understood to carry up to 30 helicopters and nearly 1,000 personnel.

It was not clear where or when the drill was conducted.

Beijing sees Taiwan as part of its territory under its One-China policy and has long vowed to bring the self-ruled island under its control, including by force.

Chinese military expert Song Zhongping said the PLA was targeting its combat training to prepare for a possible war over Taiwan.

It comes as both the US and PLA navies send aircraft carrier strike groups to the South China Sea.

A Chinese military official told the state-run Global Times: “Many on the island of Taiwan and foreign countries for a long time believe the Chinese mainland does not possess what it takes to organize a proper large-scale, joint amphibious landing operation on the island due to this kind of mission’s high complexity.

“That is one of the reasons why they do not think a reunification-by-force operation is possible.

“Exercises like this one and daily routine warplane drills near the island, could serve as a deterrent and give secessionist and foreign forces a clear look at the real situation that the PLA is fully determined and capable of safeguarding China’s sovereignty and territorial integrity.”

He warned that China could carry out “many more amphibious landing tactics, including the involvement of missile, artillery and aviation forces if secessionists insist on provoking Beijing”.

Earlier this week, Chinese media warned Australia that Beijing could target the country’s military bases in response to their support for Taiwan.

Australia has a strong relationship with Taiwan, and backs the country’s independence from mainland China.

In response, Beijing state media outlets have threatened to strike Canberra’s military bases as “punishment” for their support for Taiwan.

The Global Times, a Chinese state media outlet, warned “Australian hawks” not to get involved with Taiwan.

Hu Xijin, editor-in-chief of the outlet, said: “I suggest China make a plan to impose retaliatory punishment against Australia once it militarily interferes in the cross-Straits situation.

“The plan should include long-range strikes on the military facilities and relevant key facilities on Australian soil if it really sends its troops to China’s offshore areas and combats against the PLA.”

The editor then added Beijing needs to send a strong message “to deter the extreme forces of Australia” from “committing irresponsible actions”. (Express)