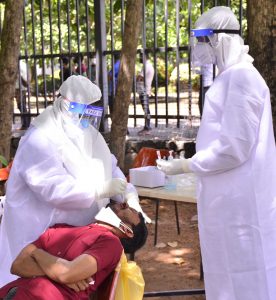 Another 52 people have been found to be infected in Mount Lavinia.

Health authorities said they were among the 320 infected people detected in the Colombo District in the 24-hour period ending at 06 am today.

Thirty-five (35) infected people were found in Homagama, while 25 were detected in Boralesgamuwa, 22 in Moratuwa, 21 in Athurugiriya, and 18 in Kottawa.

Less than 10 cases were reported from the other areas of the Colombo District. However, 15 Covid cases were detected in Avissawella and 11 cases in Colombo- Fort.

The Gampaha District reported the highest number of Covid cases during this period, with a total of 677 infections.

A total of 259 Covid infections were detected in the Galle District, with the highest number of infections of 128 being reported from the Habaraduwa area.

The Mullaitivu District also reported a spike in Covid cases with a total of 255 cases being detected during this period. Among the detection, 254 cases were found in the Puthukkudiyiruppu area alone.

Meanwhile, less than 100 coronavirus infections were detected in the remaining District in the country.

Sri Lanka is currently battling the third wave of the coronavirus, which was detected following the emergence of the New Year coronavirus cluster in April. (Colombo Gazette)