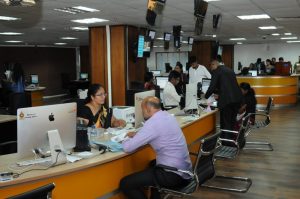 Public and private institutions will be inspected today to monitor if the health guidelines on COVID-19 are being adhered to by the management and employees.

He said stringent action will be taken against all public and private institutions that do not follow the health guidelines at all times.

DIG Rohana said the measures are being taken in order to curtail the spread of the third wave of the coronavirus in Sri Lanka.

He said a number of other quarantine operations will also be conducted today.

The Police Spokesman said the National Identity Card (NIC) system comes into place today. Those without a NIC will be permitted to use their passport or Driver’s Licence during this period.

DIG Ajith Rohana said foreign nationals in the country will be permitted to use their passports.

He urged the public to adhere to the system introduced by the Police, warning that action will be taken against those who step outdoors in violation of the NIC system.

DIG Ajith Rohana added that those in isolated areas must remain indoors until the isolation status is lifted.

He further said the inter-province travel restriction is still in place and only essential services and food transportation for sale will be permitted to cross borders.

DIG Rohana said 64 ppl in 33 vehicles who had attempted to leave the Western Province yesterday had been warned and turned away.

He said, however, those attempting to violate the inter-province travel restriction from today will be arrested and produced in court.

The Police Spokesman further said the nighttime travel restriction from 11 pm- 04 am daily will come into effect from tonight and urged the public to adhere to the restriction.

DIG Ajith Rohana said the Quarantine Law will be strictly enforced from today until the 31st of May. (Colombo Gazette)