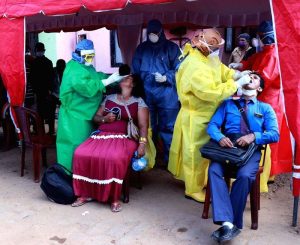 A number of Covid infected individuals have been detected from the Borella and Mirihana areas in the Colombo District.

The detections were made during a 24-hour period ending at 6am today.

A total of 56 infected people were reported from Mirihana, while 36 infections were detected in Borella.

According to authorities, 42 infected people were found in Piliyandala, 38 in Mulleriyawa, 37 in Moratuwa, 35 in Mount Lavinia, 29 in Wellampitiya, 21 in Awissawella, and 11 from Dehiwala.

A total of 438 Covid infected people were detected in the Colombo District yesterday, followed by 410 infections in the Gampaha District, 261 in Galle, 241 in Kalutara, 179 in Nuwara Eliya, 138 in Kandy, and 100 in Kurunegala.

Health authorities said less than 100 Covid infections were reported from the remaining Districts.

In the Gampaha District, the highest number of 173 Covid cases was reported from the Biyagama area, followed by 57 cases from Katunayake, and 43 infections from Seeduwa.

The authorities said the highest number of 115 Covid cases was detected from the Habaraduwa area in the Galle District.

Seventy-one (71) cases were reported from the Panadura South area and 42 cases were detected in Ingiriya in the Kalutara District.

The authorities said 65 infected people were found in Bogawantalawa and 55 Covid cases were reported from the Ginigathena area in the Nuwara- Eliya District.

In the Kandy District, the highest number of Covid cases of 35 were found in the Kandy Medical Officer of Health (MOH) area, followed by 25 infections in Gampola.

Sri Lanka reported a total of 2275 Covid cases in the 24-hour period ending at 06 am today.

Sixty-three (63) people who had returned from overseas were also among the infected individuals detected in Sri Lanka during this period. (Colombo Gazette)