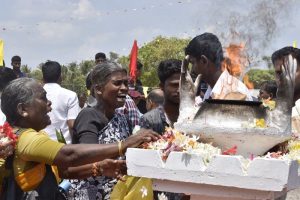 The Mullaitivu Court has permitted the commemoration of those who were killed in Mullivaikkal in the Mullaitivu District during the last phase of the civil war in Sri Lanka.

He said, however, the Court issued a new order today permitting the commemoration of those killed in Mullivaikkal, to be held tomorrow (18).

MP Adaikalanathan said people have been permitted to only light lamps at the Mullivaikkal war memorial, adding that they will have to strictly adhere to the guidelines issued on COVID-19 when visiting the monument.

The TNA MP further said that the public will not be allowed to organize any other commemoration events and it is anticipated that not many people will visit the Mullivaikkal war memorial due to the prevalent coronavirus situation in the country.

MP Selvam Adaikalanathan added that almost all the Tamil Parliamentarians will not be participating in any commemoration activities as they will be in Parliament tomorrow.

The court order comes at a time when the Mullivaikkal war memorial had been destroyed by unidentified individuals last Thursday (13).