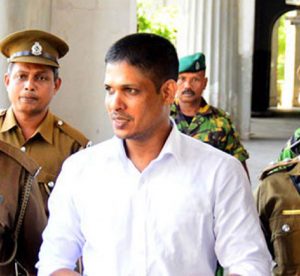 The Boossa Prison Superintendent was instructed today not to move ‘Wele Suda’ from the prison premises until the 24th of May.

The order was issued, after the court had taken up for consideration a petition filed by Wele Suda’s mother, raising concerns over his security.

The notorious drug lord had operated his drug activities in Sri Lanka while hiding overseas. He was arrested in Pakistan and deported to Sri Lanka.

In October 2015, the Colombo High Court awarded the death sentence to ‘Wele Sudha’ for the possession of 7.05 grams of heroin.

Wele Suda’s mother has raised concerns over his safety after two underworld figures were killed recently, while in Police custody.

Notorious criminal Kosgoda Tharaka was shot dead while in Police custody during an incident in Meerigama on the 13th of May.

Wele Suda and several others at Boosa continue hunger strike