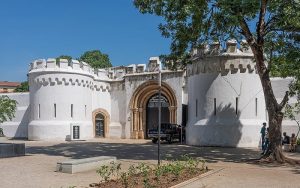 Inmates of the Bogambara Prison staged a protest on the prison roof today demanding PCR tests.

Prisons Spokesman Chandana Ekanayake told Colombo Gazette that around 20 prisoners were engaged in the protest.

He said the prisoners are demanding PCR tests to be conducted due to the current significant spread of the coronavirus in Sri Lanka.

A group of prisoners who had arrived on the 12th of May is engaged in the protest calling for PCR tests to be conducted immediately.

As they had only arrived on the 12th of May, they will be subjected to PCR tests on the 10th day of their isolation, which is the 21st of May, he explained.

Chandana Ekanayake, however, the prisoners are protesting against this system, and want their PCR tests to be conducted earlier.

He said measures are being taken by the prison officials to contain the situation and look into the demands of the prisoners. (Colombo Gazette)

Wasantha Mudalige discharged from charges under the PTA