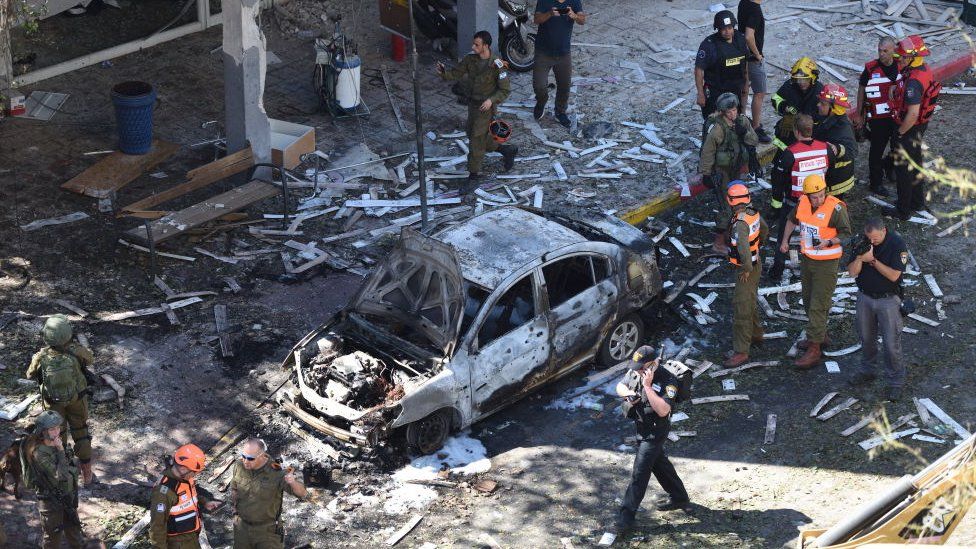 Israeli Prime Minister Benjamin Netanyahu has vowed to “continue to respond forcefully” to rocket attacks as conflict with Palestinians in Gaza enters a seventh day.

The international community has called for an end to the escalating conflict.

On Saturday, US President Joe Biden phoned Mr Netanyahu and Palestinian President Mahmoud Abbas to express concern about the situation.

A UN Security Council meeting is set to take place later on Sunday.

Since the fighting began on Monday at least 148 people have been killed in Gaza, according to Palestinian officials, and Israel has reported 10 dead, including two children. Israel says dozens of militants are among the dead in Gaza, while Palestinian health officials say its death toll includes 41 children.

Speaking in a televised address late on Saturday, Mr Netanyahu said the strikes will continue for “as long as necessary” and asserted that everything possible was being done to limit civilian casualties.

“The party that bears the guilt for this confrontation is not us, it’s those attacking us,” said Mr Netanyahu.

The flare-up of violence over the last six days came after weeks of increasing Israeli-Palestinian tension in East Jerusalem, which culminated in clashes at a holy site revered by both Muslims and Jews. Hamas – the Palestinian militant group that runs Gaza – began firing rockets after warning Israel to withdraw from the site, triggering retaliatory air strikes.

Ten members of one family were killed by an Israeli air strike at a refugee camp west of Gaza City.

A five-month-old baby, Omar Al-Hadidi, was the only survivor, after his mother, four siblings, aunt and four cousins died.

The baby’s father, Mohammad Al-Hadidi, was not at home at the time. “There were no rockets there, just women and children, no rockets, just peaceful children celebrating [Muslim festival] Eid, what have they done to deserve this?” he told Reuters news agency.

A doctor treating Omar said: “He was in a bad condition. His thigh bone is broken and he has bruises all over his body but thankfully after first inspection he is stable.”

The Israel Defense Forces (IDF) said Palestinian militants had fired 278 rocket launches from Gaza, with homes hit in the southern cities of Ashdod, Beersheba and Sderot.

The IDF also said “many dozens” of rockets that crossed into Israel were intercepted by the Iron Dome missile defence system.

A rocket hit a street in Ramat Gan, a suburb of Tel Aviv, killing a man. He was reportedly hit by shrapnel in his apartment.

Earlier on Saturday, an Israeli air strike destroyed a high-rise building housing media organisations, including The Associated Press and Al-Jazeera, plus a number of offices and apartments.

In a statement released shortly afterwards, the Israeli military said the building housed military assets belonging to Hamas, the Palestinian militant group that rules Gaza. The building’s landlord has denied this.

United Nations Secretary General Antonio Gutteres said he was “deeply disturbed” by the strike on the building.

“The secretary-general reminds all sides that any indiscriminate targeting of civilian and media structures violates international law and must be avoided at all costs,” a spokesman for Mr Gutteres said.

The Associated Press (AP) said the block was hit roughly an hour after Israeli forces ordered people to evacuate.

The news organisation’s CEO, Gary Pruitt, said: “This is an incredibly disturbing development. We narrowly avoided a terrible loss of life. A dozen AP journalists and freelancers were inside the building and thankfully we were able to evacuate them in time.”

The White House said President Biden told Prime Minister Netanyahu that he continued to support Israel’s right to defend itself. He expressed concern over deaths on both sides and, following the tower-block strike, called for journalists to be protected. (Courtesy BBC)