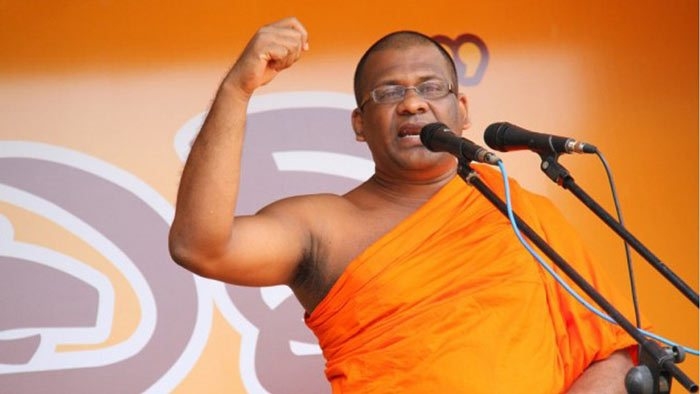 A US report has accused the Bodu Bala Sena (BBC) of continuing to promote the supremacy of the ethnic Sinhalese Buddhist majority.

The US State Department released the 2020 Report on International Religious Freedom.

According to press reports and civil society, Buddhist nationalist groups such as the BBS continued to promote the supremacy of the ethnic Sinhalese Buddhist majority and denigrated religious and ethnic minorities, especially in social media.

These groups said authorities did not act against those inciting hatred against the Muslim and Tamil community.

At a hearing in January 2020, 76 medical staff submitted statements claiming knowledge of forced sterilizations of Sinhala women carried out by Muslim doctor Siyabdeen Shafi over several years. A medical expert review of the evidence for the sterilization claims, ordered in 2019, remained pending. Shafi was arrested for suspicious accumulation of wealth and released in 2019. He was investigated further after a social media campaign accused him of the sterilizations. He was not charged with any crimes, however. At the request of police, a magistrate continued the case until March 2021.

Muslim civil society activists described a “vast outpouring” of anti-Muslim hate speech on social media and in parts of the broadcast and print media related to the COVID-19 pandemic.

According to Human Rights Watch, in April and May 2020, there were calls on social media to boycott Muslim businesses and false allegations of Muslims spreading COVID-19 deliberately that authorities did not adequately refute. On April 12, in a letter addressed to the acting inspector general of police, several Muslim groups, including the Muslim Council of Sri Lanka and the Colombo District Mosques’ Federation, sought investigations into “the continued hate-mongering against the Muslim community” during the COVID-19 pandemic.

NCEASL documented 50 cases of attacks on churches, intimidation of and violence against pastors and their congregations, and obstruction of worship services during the year, compared with 94 cases in 2019. Human rights activists attributed the lower number of incidents to pandemic-related lockdowns and prohibitions on public gatherings.

According to NCEASL, the number of Christian groups worshipping in “house churches” continued to grow.

The report said that the US Ambassador to Sri Lanka Alaina B. Teplitz and Embassy officers emphasized the need for respect for and inclusion of ethnic and religious minorities as part of the postconflict reconciliation process, during meetings with the President, Prime Minister, Cabinet ministers, and other officials holding religious portfolios. (Colombo Gazette)