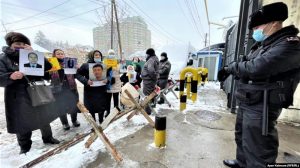 Police in Kazakhstan’s largest city, Almaty, have detained at least nine protesters who have been picketing the Chinese consulate for 93 days to demand the release of relatives they say are being “illegally” held in China.

Two of the protesters, Baibolat Kunbolat and Tursungul Nuraqai, were released several hours after they were detained late on May 11. The whereabouts of the others is unknown.

Kunbolat told RFE/RL on May 12 that he and other protesters, mainly women, were detained after they rallied in front of the Chinese Consulate and then moved to picket a Chinese bank and a Chinese gasoline station in Almaty.

According to Kunbolat, police held him for several hours and interrogated him over his role in the ongoing protests.

“I did not sign a protocol and did not write down any testimony. They let me go after 9:00 p.m. but ordered me to come back for questioning the next day,” Kunbolat said.

In recent years, many similar protests have taken place in Kazakhstan, with demonstrators demanding Kazakh authorities officially intervene in the situation faced by ethnic Kazakhs in Xinjiang.

The U.S. State Department has said that as many as 2 million Uyghurs, Kazakhs, and members of Xinjiang’s other indigenous, mostly Muslim, ethnic groups have been taken to detention centers.

China denies that the facilities are internment camps but people who have fled the province say that thousands of ethnic Kazakhs, Uyghurs, and other Muslims in Xinjiang are undergoing “political indoctrination” at a network of facilities known officially as reeducation camps.