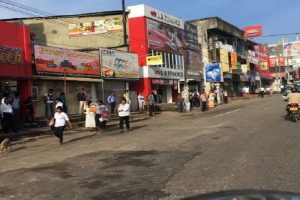 Piliyandala in the Colombo District continues to remain a high risk area for COVID-19.

The National Operations Centre for the Prevention of COVID-19 (NOCPC) said 146 Covid infected individuals have been detected from Piliyandala in the 24-hour period ending at 06 am today.

The Colombo District has reported the highest number of Covid infections during this period with 413 cases.

From the Colombo District, 24 Covid cases were detected in Narahenpita, 19 in Thalangama, 16 in Mount Lavinia, 15 in Avissawella, 14 in Nawagamuwa, 13 each in Mulleriyawa, Nawagamuwa and Kottawa, 11 each in Mattakkuliya and Kotahena, and 10 cases each in Padukka and Dematagoda.

The Gampaha District has reported the second-highest number of Covid cases during this period, with 332 cases.

The NOCPC said 87 Covid cases were detected in Biyagama, followed by 39 in Katunayake, 30 in Kelaniya, 22 in Dompe, 19 each in Kadawatha and Meerigama, 18 each in Negombo and Radawana, 14 in Ja-Ela, and 10 in Wattala.

The Kalutara District has reported 370 infections with the highest number being detected in Panadura South with 88 cases and 74 infections from the Horana area.

The NOCPC said a total of 136 cases were detected in the Kurunegala District, with 24 infections in Ambanpola, and 17 each from the Dummalasooriya and Gokarella, 16 from Galagamuwa, 15 from Kurunegala, and 13 from Nikaweratiya.

Another 128 cases have been detected in the Galle District, with 26 infections from Habaraduwa, 15 from Ahungalla, 13 from Batapola, 12 from Yakkamulla, and 11 each from Akmeemana and Poddala.

Meanwhile, 43 people who had arrived from overseas have also tested positive for Covid-19 during this period. (Colombo Gazette)