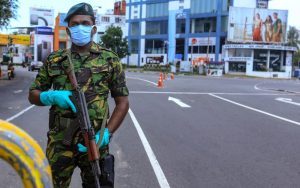 An unofficial curfew has been declared islandwide for three days from 11 pm tomorrow, 13th May 2021.

Army Commander General Shavendra Silva told Colombo Gazette that travel restrictions have been imposed from 11 pm tomorrow till 04 am on Monday (17).

Clarifying that it was not a curfew, General Shavendra Silva said that only travel restrictions have been imposed during this period.

He said essential services and transportation of food items for sale will be allowed to operate during the travel restriction.

General Silva said, however, the vaccination programme in the Western Province will continue despite the travel restrictions.

A blanket travel ban was earlier enforced around the island between 11 pm to 04 am daily preventing any movements during this time. (Colombo Gazette)