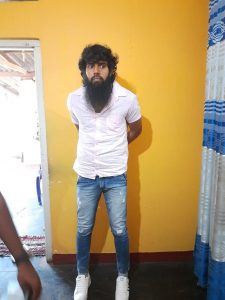 The Police have defended the shooting incident in which 27-year-old underworld figure ‘Urujuwa’ was killed in the Wandurammulla area in Kaduwela last night.

Police Spokesman, Deputy Inspector General (DIG) Ajith Rohana said the Police were forced to use their firearms due to an incident that had occurred when the suspect was taken to the area for further investigations.

DIG Ajith Rohana said the Nawagamuwa Police had arrested ‘Urujuwa’ on Monday and he was interrogated till yesterday.

Thereafter, the suspect was escorted by a team of officers from the Nawagamuwa Police to the Wandurammulla area as part of further investigations.

However, upon their arrival, an incident had occurred forcing the Police to use their firearms to contain the situation.

DIG Ajith Rohana said ‘Urujuwa’ who had sustained injuries in the incident was admitted to the Nawagamuwa Hospital, where he was pronounced dead upon admission.

The body of the suspect has been placed at the hospital, while the magisterial inquiry and postmortem will be conducted today.

Based on the suspect’s statement, the Police have seized five swords, one T-56 revolver with bullets, 36 T-56 bullets, eight 9mm bullets, and six hand grenades.

The Nawagamuwa Police has launched an investigation into the death of the notorious criminal. (Colombo Gazette)