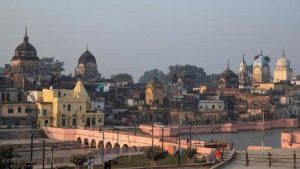 Residents of Rajanpur, a Hindu-dominated village in Ayodhya, Uttar Pradesh, elected Hafiz Azeemuddin, a cleric and a member of the only Muslim family there, as the ‘gram pradhan’ (village chief) by a good margin.

A farmer, Azeemuddin has Hafiz and Aalim degrees from the Islamic madrassa, where he also taught for a decade before getting into his family’s farming business.

“My victory is an example of Hindu-Muslim affinity, not only in our village, but entire Ayodhya,” said Azeemuddin after wining the elections.

He said of the 200 votes that he secured (out of a total of 600), only 27 would have been Muslim votes. “The rest of the votes were by Hindus who supported me,” he added.

Later, speaking to a TV channel, Azeemuddin said it was the love and support of the village people that gave him the strength to contest and win the election.

“There is communal harmony in the village,” he said. “We are all like a big family. There are three temples in the villages and I came to know that the people had prayed to God and even kept their fasts for my win.”

According to him, all funds will be utilised for the development of the village and basic amenities will be augmented and jobs given to those entitled under the MNREGA, a central government scheme.

Many residents welcomed his election. “It is a manifestation of our pluralism,” said Athar Hussain, secretary, Ayodhya Mosque Trust. “It shows that the idea of cultural harmony in India survives despite all odds. Let us strengthen the bond of harmony and fraternity.” (Khaleej Times)