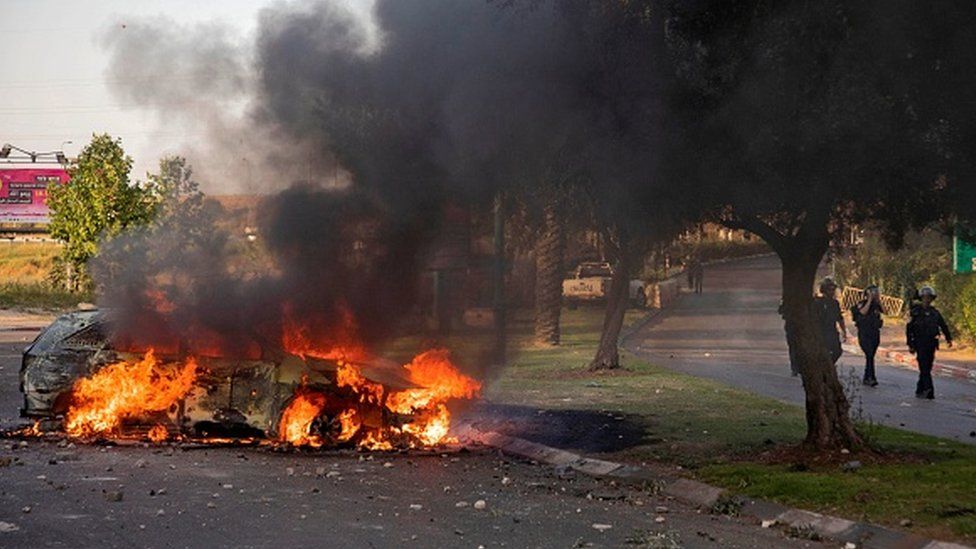 Israel has declared a state of emergency in the central city of Lod after rioting by Israeli Arabs, as conflict between Israeli forces and Palestinian militants intensified.

Cars were set alight and 12 people were reported injured in clashes Lod’s mayor likened to a civil war.

At least 40 people have died in some of the worst violence in years.

Palestinian militants said they fired hundreds of missiles at the Israeli city of Tel Aviv after an Israeli air strike demolished a tower block in the Gaza Strip on Tuesday.

Israel’s military says it is targeting militants in Gaza in response to rocket attacks on Jerusalem and other areas.

The fighting came after weeks of rising tensions that were stoked by violent confrontations between Israeli police and Palestinian protesters at a site in Jerusalem that is holy to both Muslims and Jews.

The international community has urged both sides to end the escalation. The UN’s Middle East peace envoy, Tor Wennesland, said they were “escalating towards a full-scale war”.

At least 35 Palestinians, including 10 children, and five Israelis have been killed in the violence so far, according to health officials.

Protests by Israeli Arabs broke out in Lod, a city near Tel Aviv, and escalated to full-scale rioting, with protesters throwing rocks at police, who responded with stun grenades.

The protests followed the funeral of an Israeli Arab man who died during unrest in the city a day earlier.

At least 12 people were injured in the clashes, Israeli newspaper Haaretz reported. As night fell, the situation degenerated in Lod, police said.

Israeli media reported that synagogues and several businesses had been set on fire, while Reuters news agency said there were reports of Jews stoning a car that was being driven by an Arab resident.

On Tuesday night, Israeli Prime Minister Benjamin Netanyahu declared a state of emergency in Lod. Israeli border police have been brought in from the West Bank.

The conflict between the Israeli military and Palestinian militants in Gaza has stirred unrest among the Arab minority inside Israel, leading to protests.

There has also been unrest in other cities with a large Israeli Arab population, as well as in East Jerusalem and the West Bank. (Courtesy BBC)