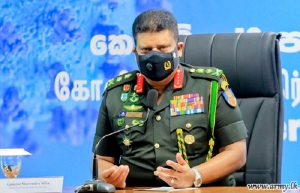 A blanket travel ban has been enforced around the island between 11 pm to 4 am daily preventing any movements during this time.

Army Commander General Shavendra Silva told Colombo Gazette the travel ban will be in place from tonight until the 31st of May, 2021.

He further said only essential services and transportation of food items for sale will be allowed during this period.

General Shavendra Silva further said people will not be allowed to cross within provinces, districts, Grama Niladhari Divisions, and even area-wise like from Bambalapitiya to Wellawatte.

Traveling to the airport and transporting sick people to hospitals will not be restricted during the travel ban, the Army Commander said.

He explained that they have selected 11 pm-4 am to enforce the travel ban due to people being found on the road at the time, some going for private gatherings, and a high number of accidents also being reported during this period.

Earlier, restrictions were imposed on movements within provinces in order to curtail the spread of the third wave of the coronavirus.

Sri Lanka is battling a third wave of the virus, following the emergence of the New Year coronavirus cluster in April.  (Colombo Gazette)