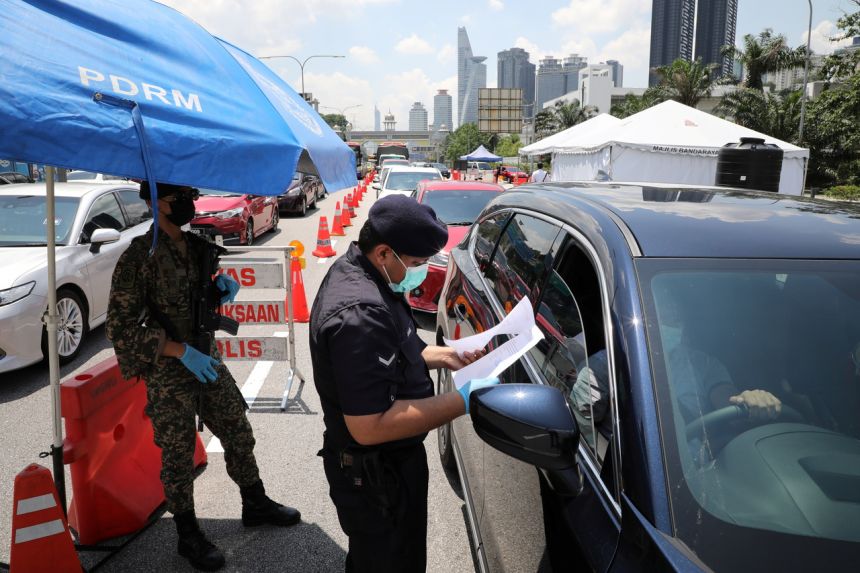 Malaysia will be imposing a nationwide movement control order (MCO) beginning on Wednesday (May 12) until early next month to stem the rising number of Covid-19 cases in the country, Prime Minister Muhyiddin Yassin said on Monday.

Tan Sri Muhyiddin said in a statement that the decision was taken by the National Security Council – the decision-making body on the pandemic – during a meeting chaired by him on Monday.

This is the third major shutdown imposed since the onset of the pandemic in Malaysia, and will likely be the strictest since March last year, when much of the country’s economy was shuttered.

Mr Muhyiddin said economic activities will continue throughout the country, but all social activities, events, dining-in at restaurants, and inter-district and inter-state travel are banned.

Travel across state and district lines is only allowed for work, emergencies, medical appointments, visiting of spouses and for vaccination appointments.

Only select outdoor exercises are allowed under the new order, which will last until June 7, Mr Muhyiddin said.

The announcement comes just days before Hari Raya Aidilfitri which will be celebrated on Thursday at the end of the fasting month.

However, the country’s early success in dealing with the pandemic was undone following the Sabah state legislative assembly elections in September that sparked a new wave, which has continued persistently for nearly nine months.

Mr Muhyiddin imposed an MCO in much of the country between January and February this year after a reopening of the economy in December led to a surge in infections.

Cases had shown signs of easing since March, but spiked again in mid-April at the start of the Ramadan fasting month. This followed the government’s move to allow the popular Ramadan food bazaars to reopen after it was banned last year. The government at the same time gave permission for nightly Ramadan prayer service and for restaurants – which usually shut at midnight – to remain open until 6am.

The health authorities have since witnessed a new surge of hospitalisations as new variants of the virus were reported in Malaysia. As at Monday, 434 patients were in intensive care units with more than half of them requiring breathing support.

On Sunday, Malaysia logged its highest death toll since the pandemic started, with 26 deaths.

This will be the second consecutive year that Malaysians will spend Hari Raya under Covid-19 movement curbs and travel bans.

Malaysia had initially hoped that its vaccination drive would ease infections as it gradually begun reopening the economy, but the surge in infections coupled with a slow arrival of vaccines has caused the government to implement another round of sweeping curbs. (Courtesy Straits Times)