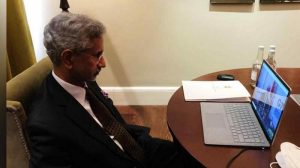 Japanese Foreign Minister Toshimitsu Motegi said Wednesday that Tokyo will contribute up to 5.5 billion yen ($50.3 million) in additional grant aid to India to help battle the coronavirus pandemic as the South Asian country is in crisis amid rapid spreading of the virus including more contagious variants.

On Friday, Japan said it will send 300 respirators and 300 oxygen concentrators to India. The Indian government is likely to use the funds to cover the cost.

The foreign ministers of Japan and Australia also agreed Wednesday to promote cooperation among the “Quad” group involving India and the United States to secure a free and open Indo-Pacific region, the ministry said.

Meeting on the fringes of the Group of Seven foreign ministerial talks in London, Motegi and Australian Foreign Minister Marise Payne affirmed that the four countries will work closely with countries in Southeast Asia and Pacific island nations toward that end.

The two also agreed to step up arrangements to hold their next round of security ministerial talks at an early date, the ministry said.

In a separate bilateral meeting, Motegi and Italian Foreign Minister Luigi Di Maio shared their serious concern over China’s recent move of passing legislation to strengthen the power of its maritime safety authorities, as well as Beijing’s actions regarding Hong Kong and the Muslim Uyghur minority in Xinjiang, western China, the ministry said. (Nikkei Asia)