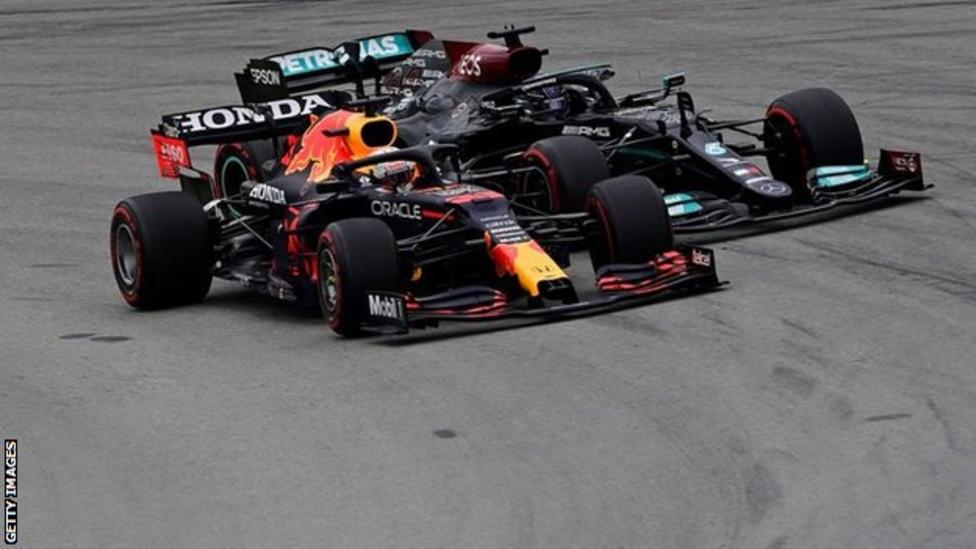 Hamilton’s third win in four races this season came despite losing the lead to Verstappen at the first corner.

Mercedes put Hamilton on a two-stop strategy and the seven-time champion closed a 23-second deficit in 18 laps to pass the Red Bull with six laps to go.

Verstappen bailed on his one-stop strategy after losing the lead and took second and the point for fastest lap as consolation.

Hamilton’s victory was the 98th of his career, after he set his 100th pole position on Saturday, and it extends his championship lead to 14 points.

Verstappen put himself in control of the race with a brave pass on Hamilton at the first corner, braking late and throwing his Red Bull inside the Mercedes, forcing the Briton to take evasive action to avoid contact.

But the Dutchman was unable to shake Hamilton, who tracked him closely towards the first pit stops.

Mercedes were unable to pass Verstappen by stopping first because the second Red Bull of Sergio Perez was just close enough to mean Hamilton would come out behind the Mexican if he stopped.

That enabled Verstappen to make his stop first, and Mercedes decided to delay Hamilton’s stop by four laps to give him a tyre advantage.

Hamilton rejoined 5.5secs behind the Red Bull but was on its tail within three laps. He stayed within a second of Verstappen for another nine laps, clearly faster but unable to pass on a track where overtaking is notoriously difficult.

Then, with 24 laps to go, Mercedes brought Hamilton in again for a new set of tyres, rejoining 22.4secs behind.

F1’s computers predicted that Hamilton would catch Verstappen on the last lap, but he was soon lapping nearly two seconds faster than the Red Bull.

Team-mate Valtteri Bottas cost Hamilton well over a second when the Briton caught him, despite the Finn being ordered by the team not to delay the other car.

But once past Bottas, Hamilton caught Verstappen on lap 60 of 66, immediately sweeping around the outside of Verstappen at Turn One to take a superb team victory after a drive from the top drawer.

It was the fourth race in succession this season in which the two title contenders have gone wheel to wheel.

Verstappen said: “In a way, I could see it coming. Already with the softs [in the first stint] he was faster and then the mediums [in the second stint] he clearly had a lot more pace – he could stay within one second.

“There was not a lot we could have done. Then they went for the second stop and I knew it was over. You could see he was getting closer and closer and I was a bit of a sitting duck.”

Hamilton said: “I feel great after this. I feel like we could go again.

“It was close start. After that just hunting – I was so close for so long and I didn’t think I could make the tyres last, but I managed to keep them in. It was a long way to come back but it was a good gamble.

“It was the plan all weekend to have two new mediums for a two-stop. Even though the one-stop looked better I knew from experience that a one-stop is very difficult to pull off. What a day.” (Courtesy BBC)