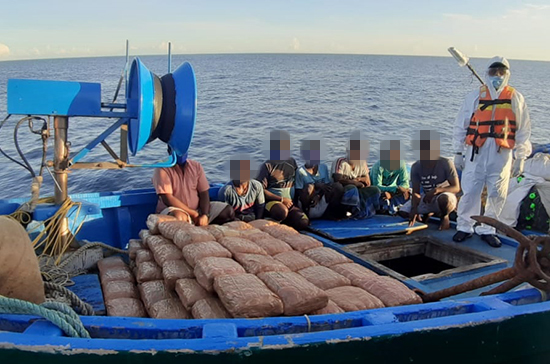 Seven Indians have been repatriated after being arrested with cannabis in Sri Lankan waters.

During a patrol in the seas off Kudiramalei Point, the Navy spotted an Indian fishing vessel in Sri Lankan waters.

The Navy said that 235kg of Kerala cannabis in 118 packages contained in 06 sacks were found in the boat.

The street value of the seized consignment of Kerala cannabis is believed to be over Rs. 70 million.

The Kerala cannabis was set on fire without being brought ashore and the Indians were repatriated.

The Navy said that the sea patrol was conducted by adhering to the COVID 19 protocols in force for the prevention of the spread of the pandemic. (Colombo Gazette)