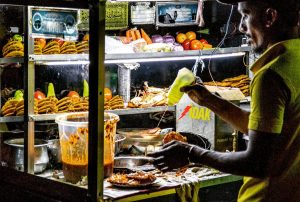 Rapid Antigen Tests (RAT) have been carried out on street vendors, especially those at bus stands and near railway stations in the Western Province.

He said random Rapid Antigen Tests were conducted on 72 of the vendors with all testing negative for the coronavirus.

DIG Ajith Rohana said the special operation will be continued today as well in other areas of the Western Province.

Meanwhile, another special operation had been conducted to inspect public institutions in the Western Province.

The Police and health authorities had inspected the 2103 institutions frequented by the public from 04-07 pm yesterday.

DIG Ajith Rohana said 3473 people at the locations were also inspected, out of which seven had been arrested for violating quarantine regulations, by failing to wear face masks or not maintaining social distancing.

The Police have requested the managements and employees of institutions frequented by the public to strictly adhere to the Quarantine Law.

The Police Spokesman said the special operation to inspect public places will be continued today as well.

DIG Ajith Rohana further said 238 people have also been arrested across the country for violating quarantine regulations in the 24-hour period ending at 06am today.

The suspects have been arrested for failing to wear face masks and not maintaining social distancing in public places.

He said a total of 2486 people have been arrested since 30th October for violating quarantine regulations.

Among 5486 people arrested for various offences under the Quarantine Law, legal action has been initiated against 5400 suspects.

The Police Spokesman said quarantine operations will be continuously conducted in the country in a bid to curtail the third wave of the coronavirus. (Colombo Gazette)