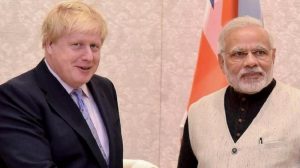 India and the UK on Tuesday adopted the ambitious ‘Roadmap 2030’ during the virtual summit between Prime Minister Narendra Modi and his British counterpart Boris Johnson, to elevate bilateral ties to a ‘Comprehensive Strategic Partnership’.

“The Roadmap will pave the way for a deeper and stronger engagement over the next ten years in the key areas of people to people contacts, trade and economy, defence and security, climate action and health,” said the statement.

In a tweet, Prime Minister Narendra Modi wrote, “We welcomed the launch of an Enhanced Trade Partnership as a roadmap to a comprehensive FTA, with a target to more than double the bilateral trade by 2030. We also agreed upon several new initiatives in health, technology, energy, etc.”

British Prime Minister Boris Johnson said: “The UK and India share many fundamental values. The UK is one of the oldest democracies, and India is the world’s largest. We are both committed members of the Commonwealth. And there is a living bridge uniting the people of our countries.

The two leaders discussed the Covid-19 situation and ongoing cooperation in the fight against the pandemic, including the successful partnership on vaccines.

Nine MoUs/Declarations were agreed/announced at the summit in the areas of Enhanced Trade Partnership, Global Innovation Partnership, India-UK Migration and Mobility Partnership, Intent on cooperation in the fields of Digital and Technology, cooperation in the field of Telecommunications/ICT, Agreement on Customs Cooperation and Mutual Administrative Assistance in customs matters, on new joint work between India and the UK on the India Energy Security Scenarios Calculator, medical products, pharmaceuticals.

To a question on whether if AstraZeneca vaccine would be produced in the UK at the briefing held by the Ministry of External Affairs in India, Joint Secretary Europe (West), Sandeep Chakravorty responded in the affirmative.

He said, “Vaccine is an important area of bilateral discussion… Prime Minister Johnson did mention and inform Prime Minister Modi that Serum Institute is investing in the UK and they will also be manufacturing in the UK. He, in particular, referred to research and collaboration on nasal vaccines,”

AstraZeneca/Covishield vaccine is a collaboration between Oxford University, Astra Zeneca and the Serum Institute of India and is ‘developed in UK’, ‘Made in India’, distributed globally’.

“They agreed to expand and enhance the existing UK-India vaccines partnership, highlighting the successful collaboration between Oxford University, Astra Zeneca and the Serum Institute of India on an effective Covid-19 vaccine that is ‘developed in UK’, ‘Made in India’ and ‘distributed globally’. They emphasized that the international community should learn lessons and agreed to work together to reform and strengthen WHO and the global health security architecture to strengthen pandemic resilience,” said the joint statement.

The two sides also discussed the early conclusion of the Free Trade Agreement between two sides. “They agreed to continue removing trade barriers on the path to an FTA, and an ambitious target of more than doubling India-UK trade by 2030,” said the joint statement.

To a question whether if there is a timeline, the Indian diplomat said, “FTAs are long-drawn-out discussions but today the two leaders agreed that they will not draw it out for too long and it is in our mutual interest to conclude the FTA at an early date.”

He added, “The Enhanced Trade Partnership has basically three elements. One is the market access part where both sides agreed to facilitate access, second is the roadmap to conclude the pre-FTA talks. The deadline is by the end of this year. Early or middle of next year both sides have agreed for an interim trade deal and continue the discussions for the FTA.”

According to the British government statement under the new trade partnership, £1 billion package in trade and investment can be expected which includes:

Over £533 million of new Indian investment into the UK, in vital and growing sectors such as health and technology.

British exports to India worth more than £446 million. This includes CMR Surgical exporting its next-generation ‘Versius’ surgical robotic system, which helps surgeons perform minimal access surgery, being rolled out to hospitals in India.

£200 million of these deals will support low carbon growth.

The package will create more than 6,500 new jobs around the UK.

The two sides also decided to cooperate in the areas of counter-terrorism, cybersecurity, UNSC reforms, climate change among other things.

“India and the UK launched a comprehensive partnership on migration and mobility that will facilitate greater opportunities for the mobility of students and professionals between the two countries,” said the joint statement.

The agreement was signed between External Affairs Minister of India Dr. S. Jaishankar and UK’s Home Minister Priti Patel. To a question on whether if this was an agreement to ensure India takes back illegal migrants from the UK, Sandeep Chakravorty explains that India does not encourage “illegal migration” and this agreement will provide opportunities for “legal migration”.

“India does not encourage illegal migration. We are against it because that prejudices legal migration. Mobility and Migration Partnership is a comprehensive document where we will take back Indian nationals who are undocumented or are in distress and are not being given nationality or residence permit, have to take back and we will do that. This agreement systemises that and provides opportunities for legal migration.”

The leaders also discussed economic offenders and the issue of extradition of fugitives Vijay Mallya and Nirav Modi.

The Joint Secretary West said, “They discussed the extradition of economic offenders and Prime Minister Modi said that economic offenders must be sent back to India at the earliest for trial. Prime Minister Johnson said that he faced some legal hurdles because of the criminal justice system in the UK but he was aware of it and they will do whatever it takes to make sure these people are extradited at the earliest.”

The summit took place in the virtual format in wake of the Covid situation. Prime Minister Modi expressed his desire to be able to welcome Prime Minister Johnson in India at his convenience after the situation stabilizes.