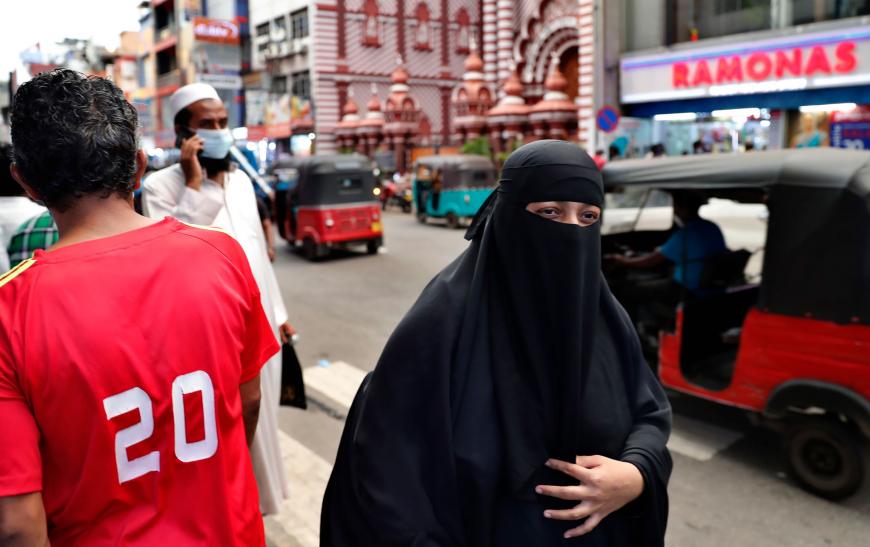 The proposed face covering ban in Sri Lanka is seen as the latest blow for Muslim women in the country.

She said that if approved by Parliament, the measure will outlaw garments worn by some Muslim women such as the niqab or burqa, increasing their social marginalization.

“After a similar ban was temporarily imposed following the Easter Sunday bombings in 2019, the Human Rights Commission of Sri Lanka documented numerous cases of Muslim women, including those legally wearing a hijab – a head covering that does not cover the face – being abused in public and denied access to public buildings such as schools, hospitals, and universities,” Ganguly said.

She said the latest ban was proposed by the Public Security Minister, Adm. (rtd.) Sarath Weerasekara, who called face veils “a sign of religious extremism” and who claims the ban is justified on “national security” grounds. However, he has said “there will be no prohibition to wear face masks to prevent the Covid-19 virus.”

“This is only the Government of President Gotabaya Rajapaksa’s latest assault on religious freedom. For almost a year, until February, the Government banned the burial of people who had died with Covid-19, falsely claiming this was necessary for public health. In effect, the ban prevented Muslims from performing funeral rites, causing intense distress to families,” she said.

Ganguly said that on March 9, new regulations relating to the draconian Prevention of Terrorism Act (PTA) gave officials the power to confine anyone for up to two years for “rehabilitation” on vaguely defined grounds of causing “religious, racial, or communal disharmony.”

She said the Rajapaksa administration has repeatedly used the PTA to target minorities, especially Muslims and Tamils, while taking no action against those inciting violence and discrimination against these groups.

Human Rights Watch has long opposed bans on Islamic face coverings because there is no evidence that the face coverings pose any kind of threat that would justify this restriction on freedom of religion.

“We also oppose policies forcing women and girls to wear religious garments as a violation of religious freedom and privacy rights under international law,” Ganguly said.

Ganguly said Parliament should reject this senseless and divisive ban on face coverings, and the Government should stop looking for excuses to abuse Sri Lanka’s marginalized minorities. (Colombo Gazette)