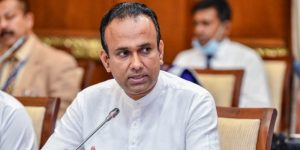 The Government says it will consider the option to mix and match Covid vaccines if the process is approved by the World Health Organization (WHO).

Cabinet co-spokesman Minister Ramesh Pathirana told reporters today that the World Health Organization is yet to approve the mixing of the vaccine brands for the 1st and second jab.

He said a research is underway in this regard, and once approved by the World Health Organization (WHO) it will be implemented in Sri Lanka.

Minister Pathirana said the Government hopes the WHO will take a decision in this regard in the near future.

“This is one method looked into to resolve the shortage in obtaining the AstraZeneca vaccine from the Serum Institute in India,” he said.

Minister Ramesh Pathirana explained that initially when placing the order for the Covishield vaccine from the Serum Institute, India was not battling a serious outbreak of the coronavirus.

However, he says currently the situation has changed, with the Serum institute being forced to focus on the local demand for the vaccine.

“Sri Lanka is currently in making use of 350,00 doses of the AstraZeneca Covishield vaccine for the second dose,” he said.

Minister Pathirana said the Government has also commenced discussions with manufacturers of the AstraZeneca vaccine in other countries to purchase the vaccine.

“The Government is also awaiting WHO approval to mix vaccine brands for the 1st and second jabs,” he said.

The Cabinet co-spokesman said the Government is looking at different ways to resolve the shortage of the AstraZeneca vaccine in Sri Lanka.

Nearly 900,000 people in the country have been administered with the AstraZeneca Covishield vaccine as the first dose.

Frontline workers in Sri Lanka were given the second jab of the AstraZeneca Covishield vaccine from 28th April, 2021. (Colombo Gazette)