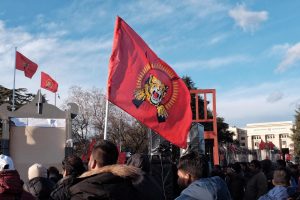 A suspect has been arrested in Eravur for promoting the ideologies of the LTTE through social media.

The 56-year-old man has been arrested by the Eravur Police under the Prevention of Terrorism Act (PTA).

DIG Ajith Rohana said the suspect has been found to be involved in 14 criminal activities in the area, especially in the Batticaloa, Karadiyanaru, and Eravur Police areas.

The Eravur Police has taken into custody the suspect’s iphone and ipad.

The Criminal Investigations Department has been instructed to dispatch a team of experts form the Computer Crimes Division to Batticaloa to assist the investigation.

The Police Spokesman said the suspect will be detained at the Eravur Police station under the Prevention of Terrorism Act.

He said the Eravur Police is conducting further investigations into the incident.

A number of suspects have been arrested in the recent past as part of ongoing investigations into the promotion of terrorism in the country.

Nearly, eight suspects have been arrested in the country on charges of promoting the LTTE, since November 2020.

The military had revealed recently that it was on alert over attempts to promote terrorism and extremism in Sri Lanka. (Colombo Gazette)