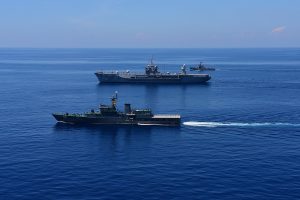 The Sri Lanka Navy has increased security in Sri Lankan waters in a bid to prevent illegal activities, including human trafficking attempts.

Issuing a statement, the Navy said the measure was taken as attempts of illegal migration could cause a surge in the transmission of COVID-19.

As result, the Navy has deployed more naval units to patrol the Northern and North-Western waters of the island round the clock.

Steps have been taken to deploy more ships and Fast Attack Craft to raise surveillance in the International Maritime Boundary Line as well as Inshore Patrol Craft to patrol the coastal waters of the island.

The Navy further said it has also increased foot patrols to add weight on the security in the coastal areas and has established Coastal Observation points in selected locations as well.

The Navy has also urged the fishing community to be vigilant regarding the possible arrival of illegal immigrants and inform relevant authorities, if any suspicious activity is observed in this regard.

Local fishermen have been urged not to make contact with foreign vessels engaging in smuggling activities at sea and to inform relevant authorities if they know of any such smugglers.

The Sri Lanka Navy has initiated special measures in a bid to help contain the spread of the coronavirus in the country.

A new cluster has emerged in Sri Lanka following the Sinhala and Tamil New year, with over 1500 cases being reported per day over the last few days. (Colombo Gazette)