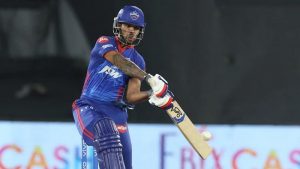 Shikhar Dhawan returned to the top of the Orange Cap table after his unbeaten knock of 69 in Delhi Capitals’ (DC) seven-wicket win over Punjab Kings (PBKS) in the Indian Premier League (IPL).

Dhawan anchored a chase of a target of 167, which DC managed to get with as many as 14 balls to spare, thus helping him overtake PBKS captain KL Rahul, who did not play Sunday’s match.

Rahul has been admitted to a hospital with acute appendicitis and will need surgery. While PBKS are yet to say how long it will take for their captain to return, it could mean he will be absent in matches in the immediate future, which means he could fall further in the race for the Orange Cap.

Mayank Agarwal, who stood in as PBKS captain in place of Rahul on Sunday, is now sixth on the table with 260 runs after his unbeaten 99. Rajasthan Royals’ (RR) Jos Buttler, who scored his maiden T20 ton on Sunday, rose to seventh with 254 runs for the season.

In the Purple Cap standings, SunRisers Hyderabad’s Rashid Khan is fifth with 10 wickets after picking one wicket in Sunday’s match against RR. Harshal Patel still holds the Purple Cap with 17 wickets and could increase his tally on Monday when Royal Challengers Bangalore face Kolkata Knight Riders. (The Quint)