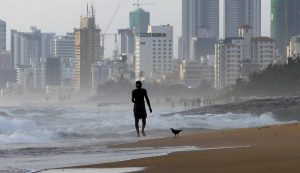 The Police have launched an operation to inspect public places, including parks and beaches in the Western Province to ensure the quarantine regulations are not violated.

He said officers had inspected nearly 6326 individuals at 1093 public places and 38 of them had been arrested for violating the quarantine laws.

The Police also said that six people were arrested for selling food in an unsafe manner to the public.

Meanwhile, twelve people from three separate locations were arrested for hosting public gatherings and parties with the use of alcohol.

DIG Ajith Rohana said nearly 4306 people were warned by the Police for violating quarantine laws, such as not wearing a face mask or maintaining social distancing.

He further said a total of 215 people were arrested for violating quarantine regulations in the 24-hour period ending at 06am today.

The Police Spokesman said the Police will continue to conduct the special quarantine operation today as well, by inspecting more public places.

DIG Ajith Rohana urged the public to cooperate with the Police and to strictly adhere to the health guidelines.

The Police have strictly enforced the quarantine regulations following a spike in COVID-19 cases across the country.

Several areas have been isolated after a significant increase was noted in the spread of the New Year coronavirus cluster. (Colombo Gazette)