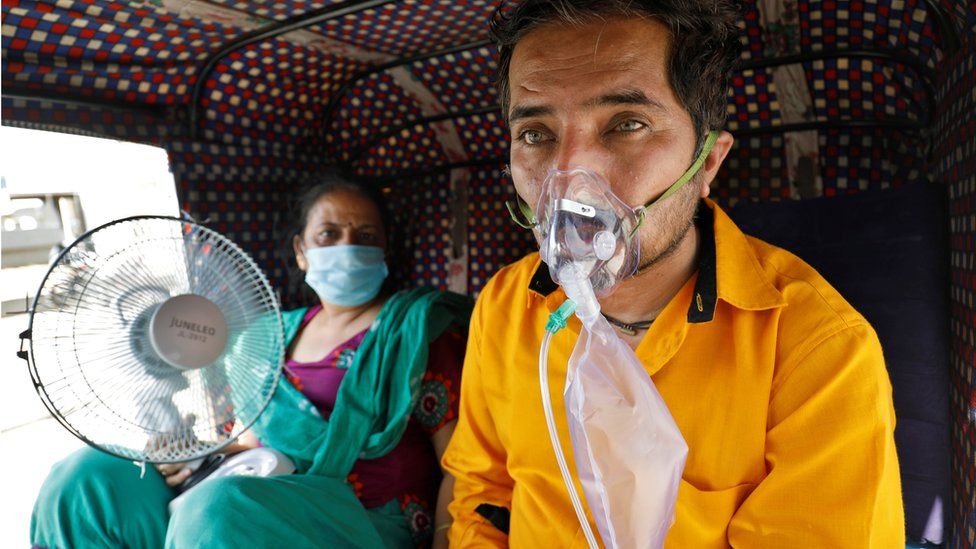 International efforts are under way to help India as the country suffers critical oxygen shortages amid a devastating surge in Covid cases.

The UK has begun sending ventilators and oxygen concentrator devices. EU members are also due to send aid.

The US is lifting a ban on sending raw materials abroad, enabling India to make more of the AstraZeneca vaccine.

India’s capital Delhi has extended its lockdown as overcrowded hospitals continue to turn patients away.

The government has approved plans for more than 500 oxygen generation plants across the country to boost supplies.

Meanwhile neighbouring Bangladesh has announced that it will close its border with India from Monday to prevent the spread of the virus.

India reported 349,691 more cases in the 24 hours to Sunday morning and another 2,767 deaths, however the true figures are thought to be much higher.

The first consignment of aid left the UK on Sunday and is due to arrive in India on Tuesday. Further shipments will take place later in the week.

The aid includes 495 oxygen concentrators – which can extract oxygen from the air when hospital oxygen systems have run out – as well as 120 non-invasive ventilators and 20 manual ventilators.

“We stand side by side with India as a friend and partner during what is a deeply concerning time in the fight against Covid-19,” UK Prime Minister Boris Johnson said in a statement.

The spike in infection has led to the cancellation of a planned visit by Mr Johnson to India and to a travel ban. Other nations, including the UAE, Canada, Germany and the Netherlands have also banned flights from India.

The White House says it will immediately provide raw materials for vaccines to Indian vaccine manufacturers.

“Just as India sent assistance to the United States as our hospitals were strained early in the pandemic, we are determined to help India in its time of need,” said President Joe Biden.

It follows calls by Indian officials and the Serum Institute of India (SII) for the US to lift export controls on raw materials for vaccines that were put in place in February.

Washington has also been criticised for delaying a decision on sending surplus vaccine doses abroad. The US has millions of unused doses of the AstraZeneca vaccine, which has not yet been approved for use there. Top infectious diseases expert Dr Anthony Fauci said the option of sending them to India was being considered.

The US will also provide medical equipment and protective gear. France meanwhile says it will provide oxygen.

In Brussels, the European Commission said it planned to send oxygen and medicine too. Its head Ursula von der Leyen said the organisation was “pooling resources to respond rapidly to India’s request for assistance”.

India’s neighbour Pakistan – which has tense relations with Delhi amid territorial disputes – offered medical equipment and supplies and its Prime Minister Imran Khan tweeted prayers for a “speedy recovery”. The country’s Edhi foundation has also offered to send a fleet of 50 ambulances to India. (Courtesy BBC)