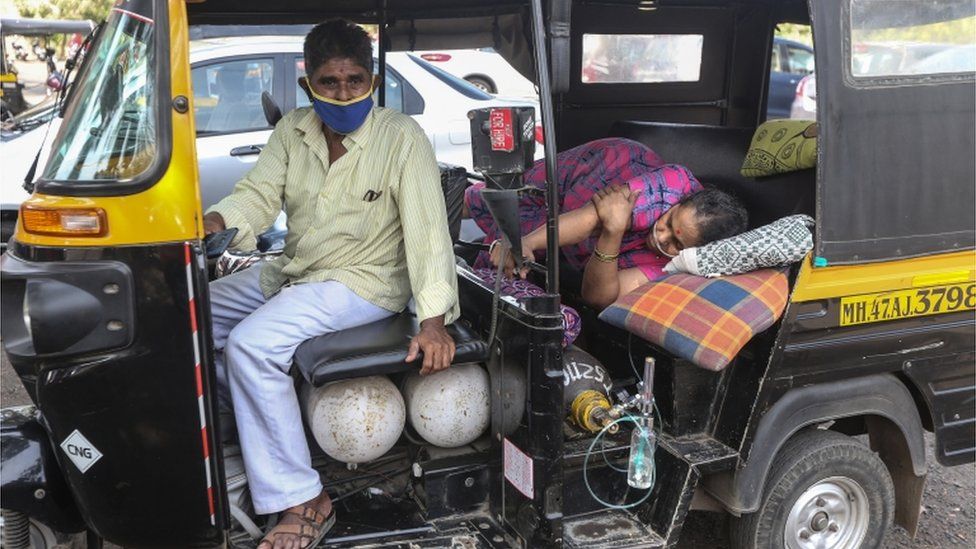 Six hospitals in the Indian capital Delhi have completely run out of oxygen and doctors say other hospitals have just a few hours’ worth of supply left.

A number of people have died while waiting for oxygen, and more than 99% of all intensive care beds are full.

India is in the grips of a second wave of Covid infections and on Thursday recorded the highest one-day tally of new cases anywhere in the world.

The country has recorded close to 16 million confirmed infections.

There have been reports of state authorities stopping oxygen tankers from travelling to other states, according to Delhi television station NDTV. Some facilities have been accused of hoarding their supplies.

Indian politician, Saurabh Bharadwaj, who is being treated in a Delhi hospital for Covid, posted a plea for help in Hindi on Twitter, saying there were just three hours of oxygen left where he was.

“A lot of people are dependent on oxygen and without oxygen, these people will die just like fish die in the absence of water,” he said. “This is a time for all to come together to work.”

Delhi is known to have among the best healthcare facilities in India, but it has been brought to its knees by the latest surge in cases, says BBC India correspondent Yogita Limaye.

Families are also waiting hours to perform funeral rites, Reuters news agency reports, with at least one Delhi crematorium resorting to building pyres in its car park in order to cope with the numbers arriving. Crematoriums are holding mass cremations, and working day and night in several cities.

“During the first phase of coronavirus, the average here was eight to 10, one day it reached 18. But today the situation is very bad. Last night we cremated 78 bodies,” Jitender Singh Shunty, who runs a crematorium in northeast Delhi, told Reuters.

“It is four times more frightful, this coronavirus… Many bodies are around, waiting. We have no place left in the crematorium to cremate them. Very bad times, very bad times,” he added.

A doctor working in a government hospital in the south of India, who wished to remain anonymous, said tensions were running high.

“Patients are trying to hit doctors,” they told the BBC. “They are blaming doctors for everything and even the [hospital] management is also blaming the doctors. It’s a stressful environment.”

“We have presently almost used 99% of oxygen ports – only 1% is left. It’s a very pathetic situation.”

In January, the pandemic was relatively under control, but since then the situation has gone from bad to worse, for a number of reasons.

India has seen a rapid rise in case numbers over the past month driven by lax safety protocols, a Hindu festival attended by millions and variants of the virus, including a “double mutant” strain. (Courtesy BBC)