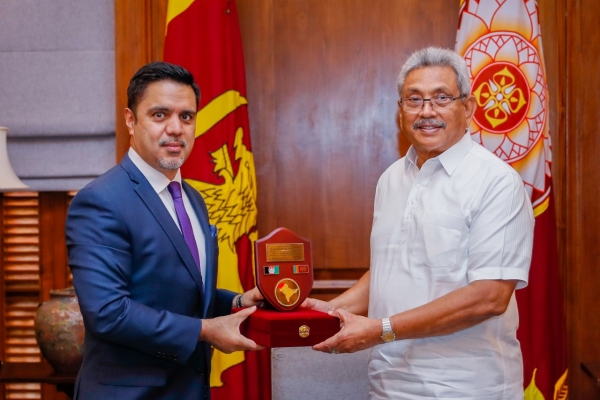 Ambassador Haidari called on President Gotabaya Rajapaksa as part of his regular consultations and collaboration with the leadership of the Sri Lankan Government and people, the Embassy of Afghanistan in Sri Lanka said.

The Ambassador conveyed to the President the warm greetings of President Ashraf Ghani and Foreign Minister Mohammed Haneef Atmar, and briefed him on the recent developments in Afghanistan with implications for regional peace and stability.

They particularly discussed the announcement by the Biden administration of its decision to withdraw US forces from Afghanistan by early September.

Welcoming the decision, the Ambassador told the President that the new chapter in the US-Afghanistan relations entailed continued security and military, economic development, as well as humanitarian partnerships based on the two countries’ mutual commitments under the US-Afghanistan Bilateral Security Agreement (BSA) and the Strategic Partnership Agreement (SPA).

However, he underscored the importance of effectively managing all dimensions of the withdrawal process, so it is not misperceived as a victory by the Taliban and other regional and transnational terrorist networks.

“This should be a cause for concern for the whole region where emboldened by such a misperception, terrorists could foremost threaten stability in our wider neighborhood, as well as international peace and security,” the Ambassador said.

In this light, President Rajapaksa reaffirmed the support of Sri Lanka for the principled peace efforts of President Ghani and called for an end to the 42-year suffering of the Afghan people.

Ambassador Haidari recalled the recent condemnation by Sri Lankan Foreign Minister Dinesh Gunawardena of the terrorist attacks that daily take innocent lives in Afghanistan, and greatly appreciated Sri Lanka’s firm stance against all forms of extremism and terrorism with no distinction.

He also extended to the President the gratitude of the Afghan people and government for the recent statement of the Sri Lanka Muslim Congress, which strongly rejected the use of terrorism and violence against civilians in the name of any religion, especially Islam, a faith of peace, tolerance, and co-existence.

Moreover, they took stock of the growing bilateral ties between Afghanistan and Sri Lanka, recalling the 62nd anniversary of the establishment of diplomatic ties between the two countries, which both sides virtually celebrated.

“Excellency, despite the global pandemic challenges, Afghanistan and Sri Lanka have initiated, initialed, and signed 10 MOUs and Agreements over the past two years since I took up my job here. Just last month, I signed with the Honorable Foreign Minister Gunawardena the Political Consultations MOU between our two Ministries of Foreign Affairs, under which all issues of mutual interest and concern can be discussed for further bilateral cooperation from now on,” the Ambassador told the President.

Ambassador Haidari also sought the continued support of Sri Lanka in multilateral forums, including for Afghanistan’s candidate for the presidency of the 76th session of the UN General Assembly 2021-2022.

He highlighted the superior qualifications of Afghan candidate Dr. Zalmai Rassoul, former Foreign Minister and National Security Adviser of Afghanistan, as well as his contributions to the Afghanistan-Sri Lanka bilateral ties during his tenure as Afghan Foreign Minister.

Ambassador Haidari thanked President Rajapaksa for the recent appointment of a capable and committed envoy to Afghanistan and said that Ambassador Piyal De Silva and he were daily in touch, working collaboratively to advance the shared bilateral goals of Afghanistan and Sri Lanka. (Colombo Gazette)