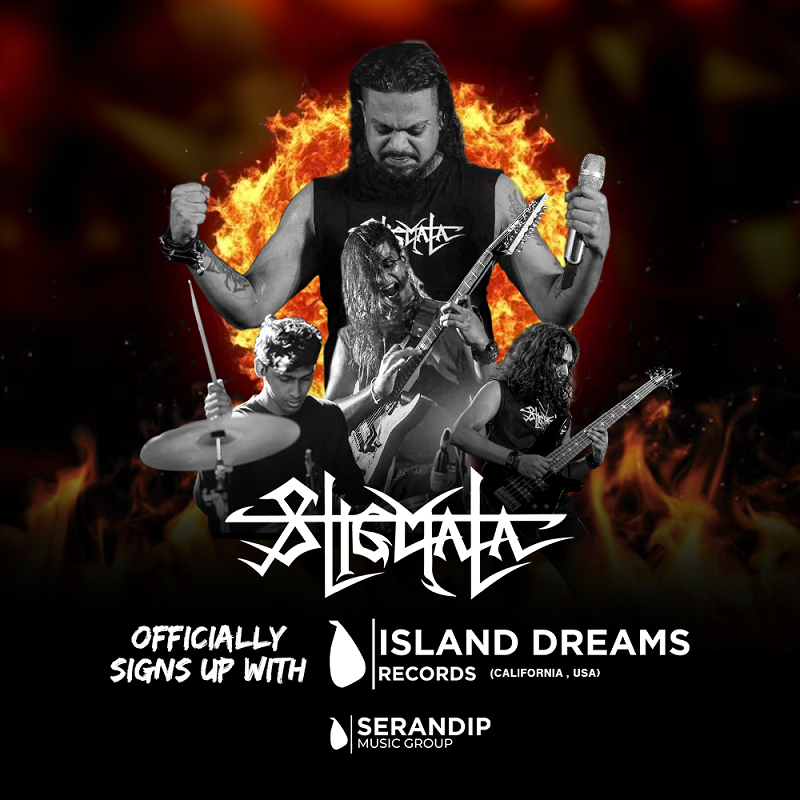 The ensemble dropped some major news recently of tying up with the American record label Island Dreams Records, under the flagship of Serandip Music Group. Following on the hot trails of these tidings is more trailblazing news that Stigmata will release a brand new single through Island Dreams Records on the 25th of April.

‘We are thrilled beyond words to have been signed up by Island Dreams Records and owe Sandun Nissanka our sincerest gratitude.” Stated the bands Frontman and lyricist Suresh De Silva. He further commented  on the importance of this venture by saying, “This will no doubt help us reach a much larger audience, opening new doors of opportunity for us. And thanks to working with Romesh Dodangoda, the music is of stellar global quality, and will blow minds and make hearts bleed whilst busting more than a few necks. We are the first Metal band to be signed by the label and both parties are ecstatic to move forward and do some amazing work together.’

‘Throw Glass in a House of Stone’ is the band’s 3rd single release off their upcoming 5th album. Along with the songs that preceded this, both ‘Alyssa’ and ‘Sacred Spaces: Solve et Coagula’, this record is mixed and mastered by Grammy nominated UK based production legend Romesh Dodangoda, who has helmed music for such iconic bands as Motörhead, Bring Me The Horizon, Architects and Sylosis to name a few.

‘Throw Glass in a House of Stone’ is broken into two distinctive parts. Part I is an instrumental titled Acta Nuntiaturae, and part 2 is titled Throw Glass in a House of Stone. The song deals with an all integral topic of addictions in this time and age, from how humanity is addicted to not just narcotics and alcohol, but also to technology such as our mobile phones and electronic devices, in addition to our minds slavery to work, sex and pornography, certain lifestyles, vanity, infidelity, toxic behavior and public validation.

Stigmata continues to honour its legacy of hardwork and unwavering passion for all things Metal by never compromising on their artistic vision and integrity, and their love and respect for their fans who have been supporting the band since its inception. This is a band that has never taken a break or a hiatus in their 21 year journey and continues to work harder than ever.

The eclectic metal collective, namely Frontman Suresh, Lead Guitarist Tenny, Bassist Thisara, and Drummer Hafzal, have once again reached a milestone, being the first Lankan based band to be signed up by a US label, and to release new music worldwide on the heels of this mega announcement.

Throw Glass in a House of Stone will be released globally on the 25th of April on all leading streaming platforms.

The 5th Album is sponsored by Suriya Brothers. And the official rehearsal studio is J & S Studios. The official clothing partner for the 21 year anniversary is Empire Clothing Inc. The official PR collaborative partner is The Good PR.

Be sure to like, follow and subscribe to the band’s official social media channels for the latest music, gig and tour updates, along with merch related news and all things Heavy Metal.