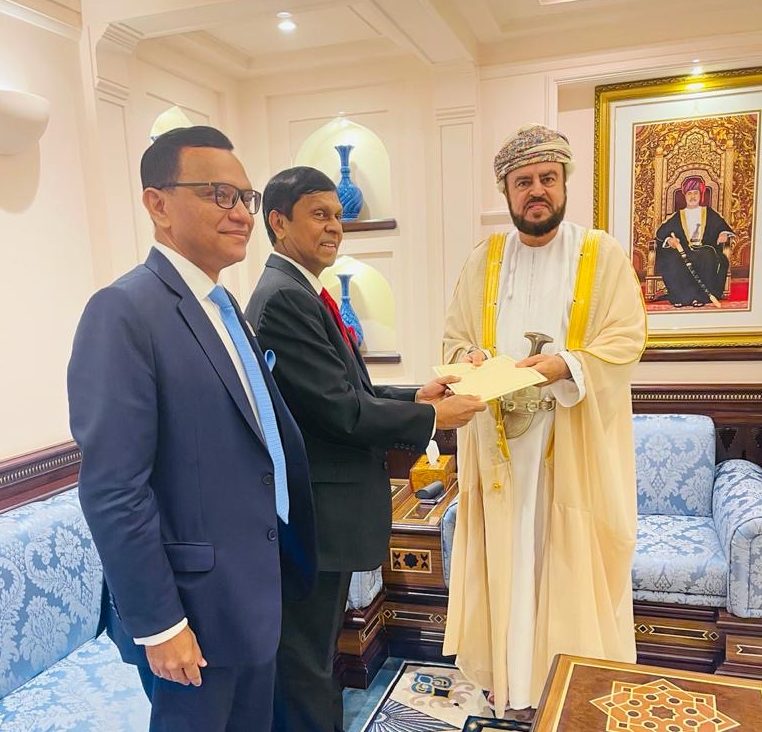 Prime Minister Mahinda Rajapaksa sent a special representative to have talks with Oman.

The visit also coincides with the celebration of the 40th Anniversary of Diplomatic Relations between Sri Lanka and the Sultanate of Oman which falls this year.

Ambassador of Sri Lanka to the Sultanate of Oman Ameer Ajwad accompanied the State Minister. During the audience, ways and means to further enhance bilateral relations between the two countries were discussed.

The Embassy of Sri Lanka in Muscat organised a series of meetings for State Minister Cabraal and the accompanying 10 member Sri Lankan delegation from the Central Bank, State and private banks of Sri Lanka.

The Sri Lanka delegation led by State Minister Cabraal met with the Minister of Commerce, Industry and Investment Promotion of the Sultanate of Oman Qais bin Mohamed Al Yousef and discussed on a range of areas for mutual economic cooperation including trade and investment between the two countries.

The Sri Lanka delegation also met with the Executive President of the Central Bank of the Sultanate of Oman Tahir Salim Al Amri, and discussed further enhancement of cooperation between the Central Banks of both countries and agreed to sign an MoU between the two central banks in the near future.

The Sri Lanka delegation led by State Minister Cabraal also had fruitful discussion with Chief Executive Officer of Muscat Bank,Waleed K. Al Hashar and engaged with other prominent private banks in Oman namely Bank of Dhofar, National Bank of Oman and the Bank of Sohar.

The Embassy of Sri Lanka also organised a productive investment promotion meeting with Chief Executive Officer of Madayn and Chairman of Shumookh Investment and Services of Oman Hilal Al-Hasani and his high level delegation with a view to attracting foreign direct investments to Sri Lanka.

Ambassador Ameer Ajwad hosted a lunch in honour of the visiting Sri Lanka delegation led by the Special Representative of the Prime Minister of Sri Lanka to the Sultanate of Oman at hotel Al Falaj in Muscat owned by Aitken Spence of Sri Lanka.

State Minister Cabraal presented the ‘badges of logo’ issued by the Embassy of Sri Lanka in Muscat to mark the 40th Anniversary of Diplomatic Relations between Sri Lanka and Oman, to the dignitaries.