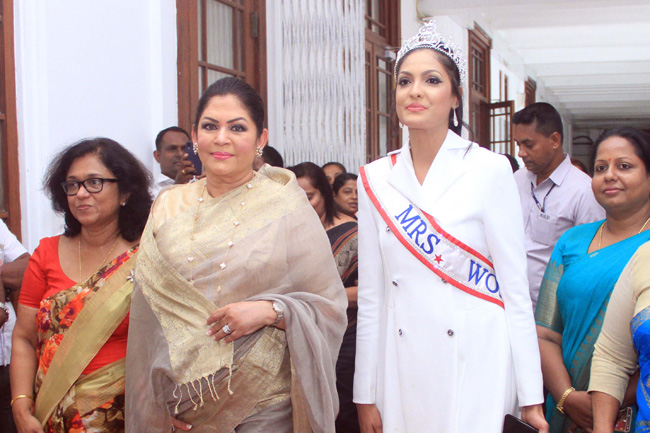 Former Mrs. World Rosy Senanayake said she was appalled over the behaviour of reigning Mrs. World Caroline Jurie at the Mrs. Sri Lanka for Mrs. World pageant held in Colombo.

She told Colombo Gazette that she was disgusted and that Jurie’s behaviour was unethical and unacceptable.

Senanayake was one of the guests at the finals held at the Nelum Pokuna theatre last night.

She was also on stage to greet the original winner Pushpika De Silva but left before the incident took place.

“We should be supporting women. If we can’t support women then we must keep our mouths shut,” Senanayake said.

The judges had picked Pushpika De Silva as the winner of Mrs. Sri Lanka for Mrs. World last night (Sunday).

However, Jurie later made an announcement saying the winner was divorced and cannot contest and so she had decided to crown the first-runner up as the new winner.

Jurie then removed the crown from the winner on stage and crowned the first-runner up as the new winner.

Senanayake said that if there was an issue it should have been resolved off stage and not on stage.

“I really don’t understand where this came from,” she said.

The former Mrs. World also apologised to Pushpika De Silva on behalf of all women in Sri Lanka.

Chandimal Jayasinghe, the National Director for Mrs. Sri Lanka for Mrs. World had told Colombo Gazette that there was no documented evidence to back claims that Pushpika De Silva was divorced.

Pushpika De Silva has been made the winner again and the crown will be formally given to her at a press conference in Colombo tomorrow (Tuesday). (Colombo Gazette)