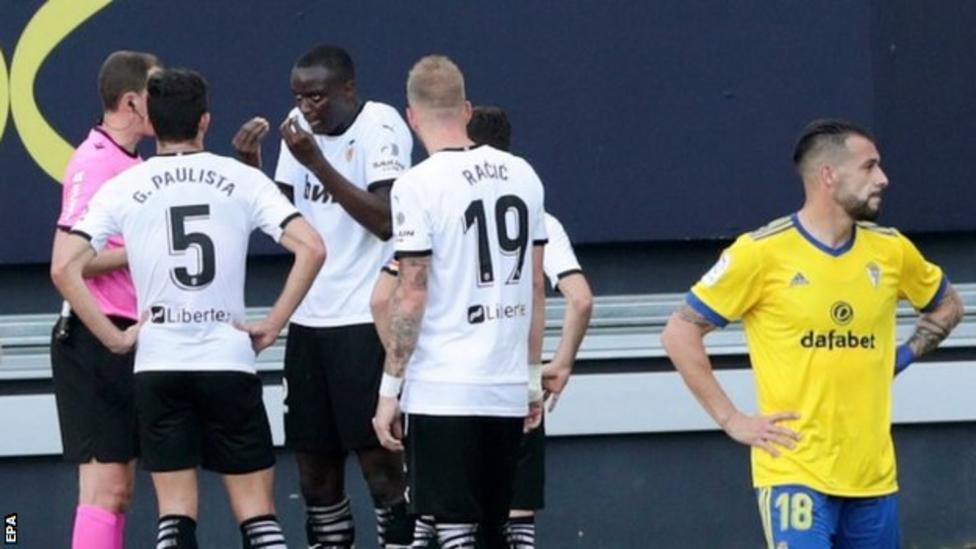 Valencia walked off the pitch during Sunday’s 2-1 La Liga defeat at Cadiz after an alleged racist comment, before later returning to complete the match.

Mouctar Diakhaby reacted furiously after a first-half clash with Cadiz’s Juan Cala and spoke with the referee.

Valencia’s players left the pitch in protest and the club said Diakhaby, 24, “received a racial insult”.

He later asked his team-mates to return and they resumed the game but without Diakhaby, who was substituted.

Valencia defender Jose Gaya said after the game that the team either had to resume playing or risk a points deduction.

“Diakhaby told us he heard a racist insult so we all went off the pitch,” Gaya told Spanish network Movistar.

“We were told that we had to play because if we didn’t, they would take the three points off us and maybe we’d be docked more points.

“Diakhaby asked us to play on. We wouldn’t have done so if he hadn’t done so. He said he wasn’t in the right state of mind to keep playing. He is devastated.”

The game was 1-1 at the time, with Kevin Gameiro having equalised after Spanish defender Cala opened the scoring for Cadiz.

“We offer our complete backing to Mouctar Diakhaby,” Valencia said of the decision to return to the pitch.

“The team have held a meeting and decided to continue the game, in order to fight for the honour of the club, but denounce racism of any kind.”

Gaya said he had heard the comment Cala made to Diakhaby.

He added: “It was a very ugly insult which I won’t repeat. We haven’t been able to speak with Cala because he was the last player to leave the pitch. I’m certain that he said something. It was a very strange game.” (Courtesy BBC)

Rafael Nadal fights back to win at Barcelona Open