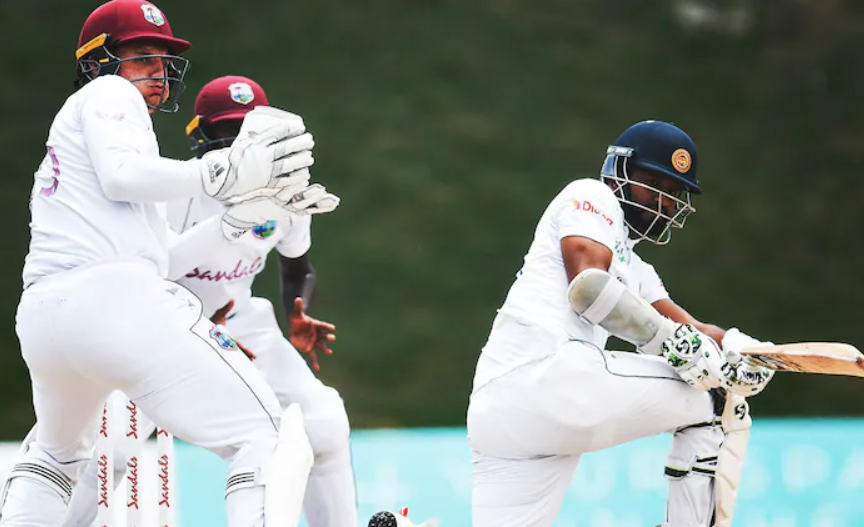 A fighting half-century from Sri Lanka skipper Dimuth Karunaratne helped the visitors end the West Indies tour on a good note as the two-match Test series was drawn at 0-0.

Karunaratne, who had until then scored just 16 runs in three innings, came back to form when it mattered the most for Sri Lanka.

On the final day of the second Test between Sri Lanka and West Indies, his knock of 75 runs was invaluable for the visitors, as he played out 176 balls on a day when his team were primarily looking to survive the day.

Sri Lanka started the final day at 29/0 in the chase of 377 runs, that was built upon a Kraigg Brathwaite century in the first innings. Although all three results seemed possible at the end of Day 4, the scheduled play on the final day was delayed by an hour due to wet outfield.

From there it looked difficult for Sri Lanka to entertain a win for their side. The draw seemed to be the best option out for them.

They had a scare in the third over of the day when in-form Lahiru Thirimanne gloved a Shannon Gabriel bouncer behind only to be granted a second chance as wicket-keeper Joshua Da Silva spilled the catch.

Thirimanne, with half-centuries from each of his three past innings, was on 17 at the time and the opening stand was only worth 38.

By the time the West Indies removed Thirimanne, the Sri Lankan opening stand was worth 101 and had soaked up more than 38 overs.

But Oshada Fernando fought for the visitors and scored an unbeaten 66 as Sri Lanka ended the day at 193/2 and the match ended in a draw.

West Indies captain Kraigg Brathwaite was named Player of the Match for his first-innings century and second-innings 85, while Suranga Lakmal (11 wickets at 21.45) was crowned Player of the Series. (Courtesy India Today)