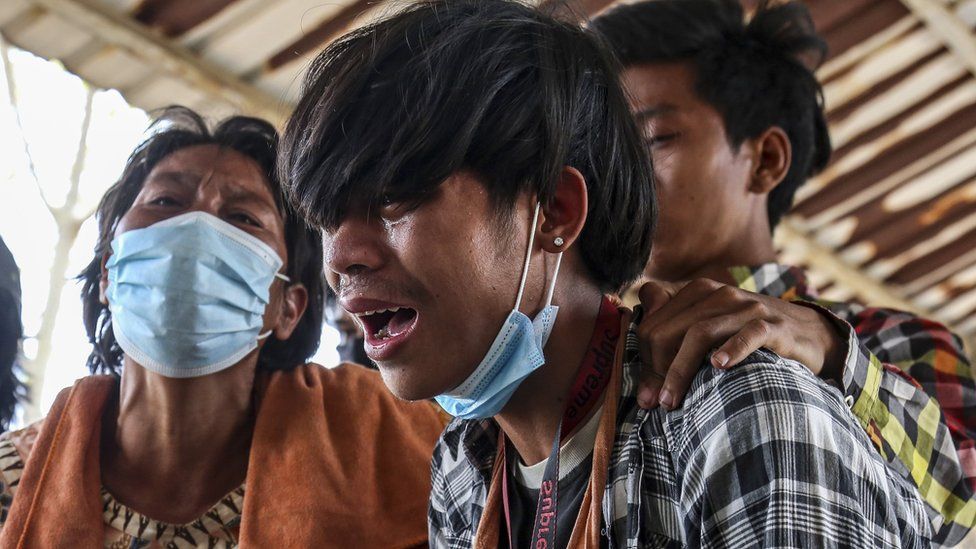 At least 43 children have been killed by armed forces in Myanmar since February’s military coup, according to rights organisation Save the Children.

The group said the South East Asian country was in a “nightmare situation”, with the youngest known victim just six years old.

A local monitoring group puts the overall death toll at 536.

Ms Suu Kyi, along with four of her allies, were charged last week, but the alleged crime – which carries a prison term of up to 14 years – has only now come to light.

The new charge against Ms Suu Kyi is in addition to earlier charges of possessing illegal walkie-talkies, violating Covid-19 restrictions during last year’s election campaign, and publishing information that may “cause fear or alarm”.

The UN’s envoy to Myanmar has warned of the risk of an “imminent bloodbath” as the crackdown against pro-democracy protests in the country intensifies.

The warning follows a flare-up in fighting between the army and ethnic minority militia in border areas.

The UN has become the latest organisation to urge the families of its workers to leave, but has said that some staff will remain in the country.

The unrest in Myanmar began two months ago, when the military seized control of the country after an election which Ms Suu Kyi’s National League for Democracy (NLD) party won by a landslide.

When tens of thousands of people took to the streets nationwide to protest against the coup, the military used water cannon to attempt to disperse them. After a week, the response escalated, and rubber bullets and live ammunition were used.

The deadliest day of the conflict so far came on Saturday, when more than 100 people were killed.

Witnesses say the armed forces have attacked people at random on the streets, and some people have even been killed in their own homes.

The family of six-year-old girl Khin Myo Chit told the BBC she was killed by police while she ran towards her father during a raid on their home in the city of Mandalay at the end of March.

“They kicked the door to open it,” her sister, May Thu Sumaya, 25, said. “When the door was open, they asked my father whether there were any other people in the house.”

When he said no, they accused him of lying and began searching the house, she said.

That was the moment when Khin Myo Chit ran over to their father. “Then they shot and hit her,” May Thu Sumaya said.

Also among the dead are a 14-year-old boy who is believed to have been shot while inside – or close to – his home in Mandalay, and a 13-year-old who was shot in Yangon while playing in the street.

Save the Children has warned that the number of children injured in clashes is also likely to be significant, citing the case of a one-year-old baby who was reportedly shot in the eye with a rubber bullet.

The rights group warned that the violence was having an effect on children’s mental health as they suffer fear, grief and stress. (Courtesy BBC)

Sri Lanka to import 20,000 metric tons of rice from Myanmar