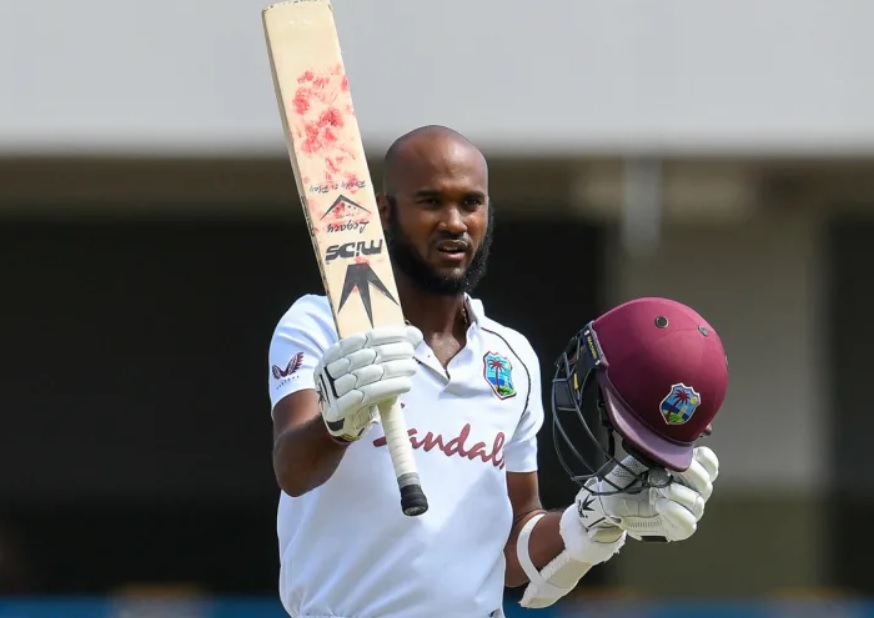 The second Test between the West Indies and Sri Lanka is set for a thrilling finish with the tourists heading into day five with all 10 wickets in hand and a huge target in front of them.

Half-centuries from Kraigg Brathwaite (85), Jason Holder (71*) and Kyle Mayers (55) powered the West Indies to 280/4 when the declaration was called, setting Sri Lanka a target of 377 to win.

Sri Lanka’s first innings was wrapped up quickly on day four as Kemar Roach (3/58) struck twice in an over to bowl them out for 258.

With a healthy lead of 96, the West Indies got off to a steady start in their second innings. The visitors, meanwhile, received a blow when their specialist spinner Lasith Embuldeniya was stretchered off when he injured his leg while fielding.

John Campbell, who had already survived a DRS review, was dismissed on 10 when he reviewed a caught behind decision unsuccessfully off Suranga Lakmal (2/62).

With Nkrumah Bonner battling a back injury, Jermaine Blackwood was promoted to first drop and scored an eventful 18.

On the first ball of his innings, he was struck on the pad by Lakmal with Sri Lanka calling for the review. He survived that review, but only just.

On five, he was involved in a major mix-up with Brathwaite that almost saw the skipper run out for seven after Blackwood turned down a second run. Only Karunaratne’s failure to gather the ball saved Brathwaite.

On seven, Blackwood was dropped by Thirimanne at first slip, with the Sri Lankan spilling a presentable chance off the bowling of Vishwa Fernando (0/49).

Eventually, he perished to Dushmantha Chameera (2/74), edging a short ball behind and making way for Mayers.

With the West Indies looking to set Sri Lanka a big target to chase and as quickly as possible, Mayers played his shots. The left-hander raced to his half-century in just 63 deliveries, hitting eight fours in his 55 before perishing lbw to Lakmal.

By that stage the West Indies’ lead had swelled to 236 with six wickets remaining and the dismissal did little to slow them down.

Holder got off the mark with a drive through the covers for four off Dhananjaya de Silva (0/81) and hit three boundaries inside the first 20 deliveries he faced.

Having raised his half-century off 137 deliveries, Brathwaite freed his arms after the tea break, picking up boundaries in back-to-back overs and looked on course to notch twin centuries. With the landmark in sight, he had his timber rattled on 85 by Chameera. That brought Brathwaite’s match with the bat to an end – a Test in which he scored 211 runs and saw out 507 deliveries.

By the time Brathwaite fell, Holder had raced to 43 and he wasted little time getting to his fifty, reaching the milestone off just 69 balls.

With a declaration coming, he and Joshua Da Silva put the foot down, adding 53 runs in less than seven overs.

When Brathwaite called them in Holder (71*) had hit seven boundaries in his 88-ball stay, with Da Silva not out on 20 off 16.

Earlier, Sri Lanka came out to bat on Thursday at 250/8 with Pathum Nissanka and Embuldeniya at the crease.

Nissanka soon got to his half-century with a single off Shannon Gabriel (1/37), passing 50 for the second time in just his third Test innings. The duo, however, were not able to add too much more to Sri Lanka’s tail.

Roach, bowling his second over of the day first removed Nissanka for 51, having him caught at deep square leg. In the same over, he dismissed No.11 Vishwa Fernando for a duck, ending Sri Lanka’s innings on 258.