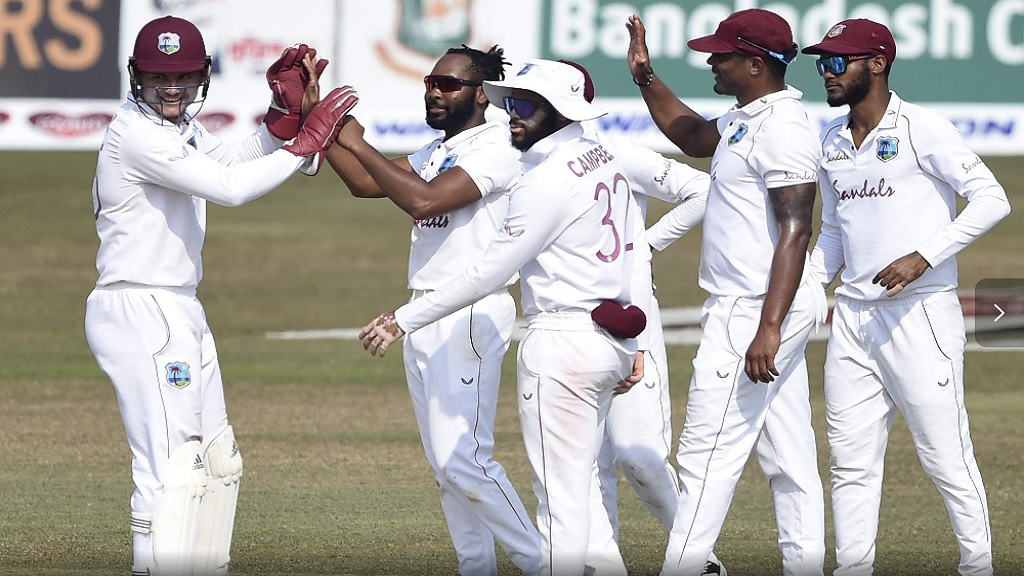 Sri Lanka trailed the West Indies by 104 runs with only two second-innings wickets in hand Wednesday after the rain-affected third day of the second cricket Test at the Sir Vivian Richards Stadium in Antigua.

Only 40.3 overs were on a day that saw four rain interruptions. Sri Lanka took their score from 136 for three overnight to 250 for eight in reply to the West Indies’ 354 before a final, heavy shower ended play.

First Test century-maker Pathum Nissanka was left 49 not out and Lasith Embuldeniya had yet to score. Nissanka had faced 119 balls and provided a solid anchor in the late stages of Sri Lanka’s innings.

Sri Lanka resumed their first innings Wednesday at 136 for three in reply to the West Indies’ first innings of 354, with Dinesh Chandimal 34 not out and Dhananjaya de Silva 23.

Chandimal was dropped by Rhakeem Cornwall from the bowling of Shannon Gabriel in the first over of the day, a lapse that wasn’t too costly as Chandimal was caught by the substitute fielder Hayden Walsh off Gabriel when he was 44 and Sri Lanka was 152 for four.

Dhananjaya fell lbw to part-time off-spinner Jermaine Blackwood in the 80th over, six overs after the resumption. He was slow to get his bat down on a shorter, flatter delivery from Blackwood, which pitched on the line of middle and off.

Dhananjaya made no attempt to review the umpire’s verdict of out, a serious oversight when replays showed the ball was turning and missing leg.

The rain returned less than an hour later, harder and more persistent. The umpires called for an early lunch and the players eventually were able to return to the field at 1:25 pm but there was another 2 1-2-hour rain delay not long after.

Wicketkeeper Niroshan Dickwella made 21 from 25 deliveries astride the rain break before falling to Jason Holder, who was the most threatening of the West Indies’ bowlers in the last two sessions. Gabriel was impressive in the first session.

The ball passed between Dickwella’s bat and pad and the West Indies’ appeal for a catch behind by wicketkeeper Joshua Da Silva was turned down. The subsequent review showed the all had taken an inside edge before hitting the pad and going on to the keeper.

Suranga Lakmal was six when he mistimed a delivery from Alzarri Joseph in the 91st over and lobbed a gentle catch to West Indies captain Kraigg Brathwaite, standing next to the non-striker. Sri Lanka were 214 for seven.

Dushmantha Chameera faced a testing time, especially from Holder who mixed short and full deliveries, once striking Chameera on the shoulder.

Holder set up Chameera for the dismissal in the 98th over, first beating him with a full delivery, which just missed off stump. He then tested Chameera with a short ball, which forced the batsman onto tip-toe to defend. Another short ball had Chameera defending before a length ball again beat him outside off-stump.

The fifth ball of the over was on a length and angled into off stump; Chameera defended but the ball took the edge and carried to Da Silva.

The rain had the final say and the day was ended by a heavy shower and by darkening skies just after 5 pm. The shower was fleeting but left damp patches close to the pitch and the umpires called off play for the day about 45 minutes later. (Courtesy Loop News Barbados)