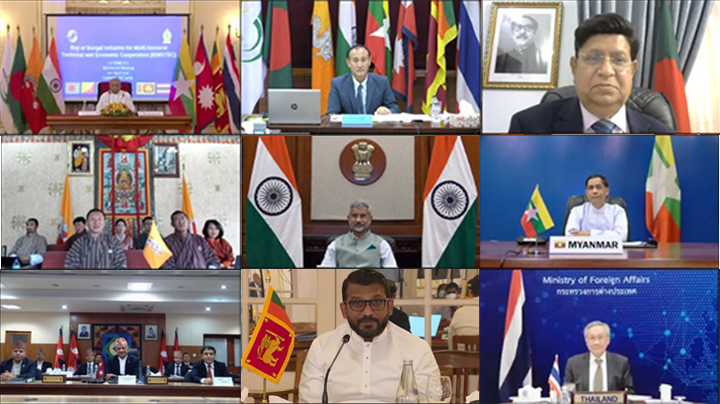 The 17th BIMSTEC Ministerial Meeting was held today with the participation of Bangladesh, Bhutan, India, Myanmar, Nepal, Sri Lanka and Thailand. This event was held virtually in Colombo, Sri Lanka.

Myanmar has been rocked by protests since the army overthrew Suu Kyi’s elected government on February 1 citing unsubstantiated claims of fraud in a November election that her party won.

On Thursday, protesters again took to the streets of cities across Myanmar, defying a security force clampdown that has killed at least 535 people.

At the BIMSTEC meeting, Foreign Minister Dinesh Gunawardena called for the early conclusion of the Charter of the Association of BIMSTEC Speakers and Parliamentarians.

The Foreign Minister informed that the platform would provide Speakers and Parliamentarians space for greater understanding, trust and friendship and to exchange ideas and information on parliamentary practices and commitment on democratic principles.

The  Foreign Minister  was  elected  as  Chair  of  the  meeting  and   State Minister  for Regional Cooperation Tharaka  Balasuriya  led the  Sri  Lanka  delegation at the meeting.

The Foreign Minister also emphasized the need to focus on expediting the adoption of the BIMSTEC Transport Connectivity Master Plan which was finalized by the Third Working Group and the Asian Development Bank.

The Minister stated transport connectivity which include coastal shipping, waterways, ports and harbours used over centuries and today road connections and air cargo capable of withstanding future disruptions, is vital for the supply chains, people to people contact and development of the region.

The Foreign Minister welcomed the newly appointed Secretary General Tenzin Lekphell from Bhutan, and wished him success in leading the BIMSTEC Secretariat and pledged Sri Lanka’s support to all his endeavors.

The BIMISTEC Ministers reviewed the progress made since the fourth BIMSTEC Summit held in Kathmandu in 2018, where Sri Lanka was elected as Chair.

This Charter defines the long term vision and priorities for cooperation, delineates roles and responsibilities of different layers of institutional structure and decision making processes.

In addition he stated that the Member States also prioritized and rationalized sectors and subsectors of the organization where Sri Lanka agreed to lead the sector on Science, Technology and Innovation with sub sectors Technology, Health and Human Resource Development. He stated that the relevant  line agencies in  Sri Lanka  are developing  a programme of action  for  the  sector taking into  consideration also the gaps  exposed in the relevant areas  by the  pandemic.

He informed that the current pandemic has amply demonstrated the importance of technology. In  this  connection Sri Lanka  is also  getting ready to  host the Technology Transfer  Facility  in Sri Lanka upon conclusion  of the  Memorandum of Association  at the  5th BIMSTEC Summit.

The Ministers  noted  with appreciation  the extensive  measures  taken by  member States  of  BIMSTEC  in responding  and  supporting  Member States  to face challenges  posed  by the COVID 19 pandemic and   urged  member states to mobilize  all relevant  sectors and sub sectors to take  collective  measures  to combat  the  challenges  of poverty, natural  disasters,  climate  change, pandemics and  other public  health  emergencies, terrorism and transnational  crimes, and food  and energy  security  through  partnerships and  joint actions.

While noting with appreciation the extensive measures taken by Member States of  BIMSTEC, State Minister further noted that the COVID-19 has devastated economies of member states in various degrees and the BIMSTEC region no longer enjoys US$3 trillion economy, which accounts for 4 per cent of the global GDP and 3.7 per cent of the global trade.

Therefore, he urged Member States to continue to share experiences, including success, challenges and lessons learnt in building back better from the COVID-19 pandemic through inclusive, resilient sustainable recovery strategies and investments.

The Sri Lanka  Delegation informed  the meeting that the date  to  host   the 5th  BIMSTEC Summit  will be  informed   after  consultations  with   Member States   through the BIMSTEC Secretariat in the  coming  months.