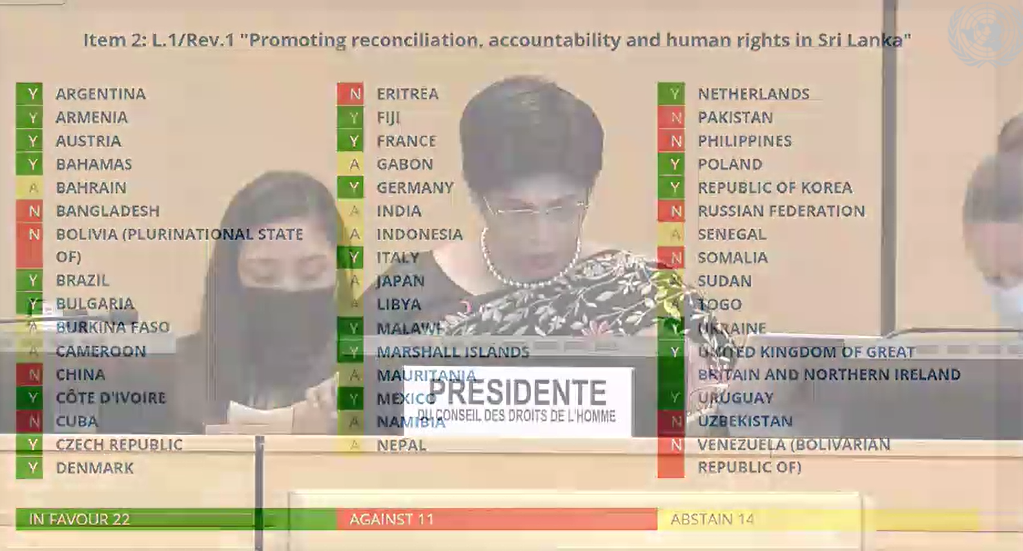 A resolution on Sri Lanka was adopted at the UN Human Rights Council (UNHRC) in Geneva today with 22 voting for, 11 against it and 14 abstentions.

Resolution A/HRC/46/L.1 was presented to the Council by Julian Braithwaite, the UK representative to Geneva, on behalf of the Core Group on Sri Lanka.

Several member States later expressed their views on the resolution during which China called for a vote.

The vote was taken online through Zoom as all 47 members of Council could not attend in person as a result of the coronavirus pandemic.

Apart from the Core Group members and the EU, others who had voted for the resolution included Korea and Mexico.

The United States, which withdrew from the UNHRC when Donald Trump was President, verbally backed the resolution ahead of today’s vote.

China, Pakistan, Bangladesh, Philippines, Russia, Somalia, Uzbekistan, and Venezuela are among the countries that voted against the resolution.

India, Japan, Indonesia, Libya, Bahrain, Cameroon and Nepal were among the countries that abstained.

Heavy lobbying took place ahead of the vote with Sri Lanka seeking support against the document while the Core Group called on several countries to support it.

The resolution requests the Office of the High Commissioner for Human Rights to enhance its monitoring and reporting on the situation of human rights in Sri Lanka, including on progress in reconciliation and accountability, and to present an oral update to the Human Rights Council at its forty-eighth session, as well as a written update at its forty-ninth session, and a comprehensive report that includes further options for advancing accountability, at its fifty-first session, both to be discussed in the context of an interactive dialogue.

The resolution also encourages the Office of the High Commissioner and relevant special procedure mandate holders to provide, in consultation with and with the concurrence of the Government of Sri Lanka, advice and technical assistance on implementing the above-mentioned steps. (Colombo Gazette)