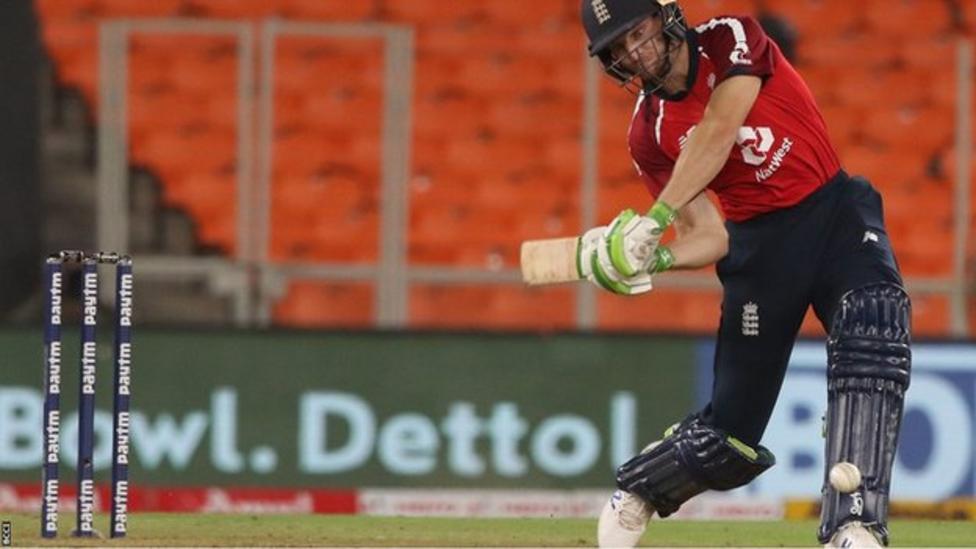 Jos Buttler’s brutal hitting trumped the genius of Virat Kohli in England’s eight-wicket defeat of India in the third Twenty20 in Ahmedabad.

Buttler muscled an unbeaten 83 from 52 balls to help England to their target of 157 with 10 balls to spare.

That was still closer than the contest could have been when India found themselves 24-3 after six overs and 87-5 from 15.

They were kept in it by captain Kohli, whose thrilling 77 not out from 46 balls illuminated a stadium left empty by the decision to play the last three matches of the series behind closed doors.

On the day captain Eoin Morgan became the first man to reach 100 T20 caps for England, his side moved 2-1 up with two matches to play and can seal the series on Thursday.

Just as in the first two matches, when victories were traded, the side that won the toss won this game.

England’s fast bowlers also repeated their superb display from the series opener, hitting the India batsmen with a barrage of short bowling on a two-paced surface.

The fit-again Mark Wood was particularly impressive, his figures of 3-31 only damaged when he took the brunt of Kohli’s late assault.

With Kohli reversing the momentum and lifting India to a competitive total, England could have been pressured in the chase, but any notion of difficulty was quickly removed by Buttler.

Targeting the leg side, he got into his stride by hitting two huge sixes over long-on in the same Yuzvendra Chahal over.

England scored at almost 10 an over in the powerplay, a rapid start that meant the remainder of the chase was calm and controlled.

Buttler added 68 with Dawid Malan and an unbroken 77 with Jonny Bairstow on the way to making his highest score in a T20 international.

Buttler should have been taken at point by Kohli on 76 when he reverse-swept Chahal, while Chahal made a meal of a chance to catch Bairstow, who ended 40 not out.

On his landmark day, Morgan was not even required to bat.

Had it not been for Kohli, India could have been blown away.

KL Rahul was bowled by Wood for his second successive duck, the returning Rohit Sharma miscued the same bowler to short fine leg and Ishan Kishan was discomforted before top-edging Chris Jordan.

But Kohli instantly looked a class apart, first assessing the conditions, then exploding into an exhilarating blur of drives and pulls.

He had 28 from his first 29 balls, then took 49 runs off his next 17, a spell that included five fours and four sixes.

He danced around the crease, toying with the attack in a knock that deserved to be appreciated by an adoring crowd inside the world’s largest cricket stadium.

In all, India took 69 from the final five overs. Buttler showed it was not nearly enough. (Courtesy BBC)