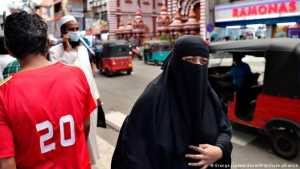 By Shereena Qazi and Easwaran Rutnam

Sri Lanka’s move to ban the burqa on “national security” grounds while calling its use “religious extremism” has been termed a “racist agenda” used to cause divisions in the country.

A burqa is an outer garment worn to cover the entire body and the face and is used by some Muslim women.

On Saturday, Sri Lanka’s Minister for Public Security Sarath Weerasekera said he had signed a paper for cabinet approval to ban the burqa, adding that the government also plans to ban more than 1,000 Islamic schools that were defying national education policy.

Sri Lankans expressed disapproval of the proposal, with many viewing the act as an attempt to appease Sri Lanka’s Buddhist majority and cause divisions.

“This is a racist agenda,” Hilmy Ahamed, vice-president of the Muslim Council of Sri Lanka, told Al Jazeera. “They are trying to convince the Buddhists that they are going after Muslims.”

Sinhalese Buddhists account for about 75 percent of the country’s 22 million people with Muslims making up about nine percent. Ethnic minority Tamils, who are mainly Hindus, make up to about 15 percent.

The signed documents outlawing the burqa were submitted on Friday, according to Weerasekera. The proposal requires the approval of the Cabinet and Parliament, where the government has a two-thirds majority, before it becomes law.

“The burqa has a direct impact on national security,” Weerasekara told a ceremony at a Buddhist temple on Saturday. “It is a sign of religious extremism that came about recently. We will definitely ban it.”

Weerasekera’s announcement came a few weeks ahead of the second anniversary of the 2019 Easter attacks on three churches and three luxury hotels in the country that killed at least 269 people.

Two local Muslim groups that had pledged allegiance to the ISIL (ISIS) group were blamed for the attacks.

“It [wearing a burqa] should be considered a right of a women to choose,” added Ahamed.

“They forcibly cremated over 350 Muslims [COVID-19 deaths] against their religious belief and now they want to ban madrasas and burqa. Will the same scrutiny be there on Christian and Buddhist education which serves the same purpose as madarasas to educate theologians.”

In March last year, the government imposed regulations that said the bodies of COVID-19 victims could only be cremated. The rules banned burial, saying the virus could spread by contaminating groundwater.

This ban was lifted last month after criticism from international rights groups across the world and months of protests mainly by Muslim groups.

Vraie Cally Balthazaar, a gender activist based in the capital, Colombo, said the move will affect the lives of Muslims in the country after the government mandated the cremation of COVID-19 victims.

“I don’t think anyone making decisions on the burqa are doing it with the intention of national security or keeping the rights of women in mind. I think the burqa has become a symbol of a power struggle that the state wants to control,” Balthazaar told Al Jazeera.

“Having dealt with the cremation issue, we now have to face this. This is affecting the lives of Muslims, particularly women, in the country.”

The burqa was temporarily banned after the 2019 bombings, drawing a mixed response with activists saying it “violated Muslim women’s right to practise their religion freely”.

Jamila Husain, a journalist based in Colombo, said there needs to be “public awareness on what the burqa really is”.

“Not many people, other than Muslims, know the difference between a burqa, hijab and niqab. Lack of proper awareness could lead to discrimination or targeting of Muslim women,” Husain told Al Jazeera.

“After the Easter Sunday attacks when the burqa was temporarily banned, Muslim women even covering their face or head with a shawl were abused or threatened because some non-Muslims assumed covering the head was banned. So there needs to be proper awareness before this is made law.”

Last month, Sri Lanka was called by the United Nations Human Rights Council to hold human rights abusers to account and to deliver justice to victims of its 26-year-old civil war, including over their treatment of Muslims. (Courtesy Al Jazeera)