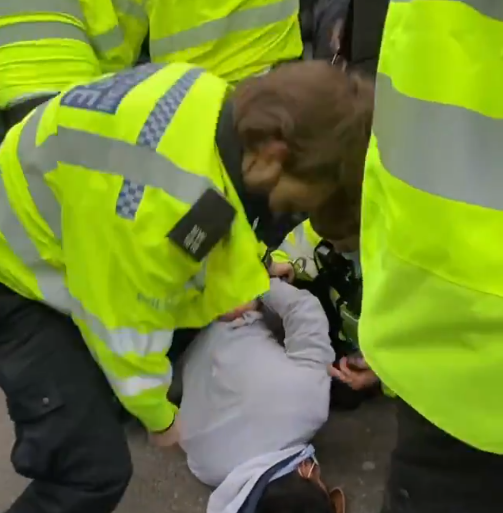 Videos posted on social media showed the protesters confronting the Police when the Police attempted to disperse the protest yesterday (Sunday).

A heated exchange resulted in the protesters surrounding the Police when they attempted to arrest one man.

The Harrow Times quoted a Met Police spokesperson as saying the Police attended a protest in Kenton Road, Harrow on Sunday, 14 March. Officers engaged with those present and they subsequently dispersed.

“One man was arrested at the scene but subsequently de-arrested.”

The Harrow Times further reported that the protesters are understood to have gathered in support of a woman called Ambihai Selvakumar, who is currently on hunger strike.

She is currently on her 16th day of strike action which is believed to be taking place in Kenton.

Selvakumar is a director of the International Centre for the Prevention of Genocide (ICPPG) and is only having water. The British Tamil woman is hunger striking to demand Sri Lanka be referred to the International Criminal Court. (Colombo Gazette)